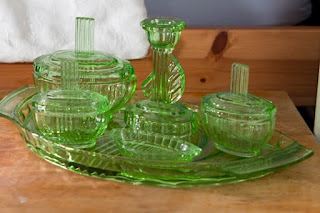 I've wanted a glass dressing table set for some time. As a child, I was fascinated by my mum's china one – I've never seen another one like it, but it was white with blue borders and little pink and gilt flowers. Before last Christmas, Oxfam had a glass set in the window, and I dropped a few hints to Mr Robot. However, I'm not very good at hinting, and while the set disappeared from the display it did not reappear in my stocking. (A bottle of discontinued, much sought-after Jean Patou Divine Folie showed up instead; proof of his most excellent present-buying skills.)
Anyway, yesterday Oxfam had another set in their window. Tray, big pot, two smaller pots, candlestick and pin tray, all for £15. I took one look and said, "I'm having that!" and went in and bought it. I didn't check it over for condition, but when I got it home I found there's just one tiny chip on the corner of one of the lugs on the pin tray. What I really love about it is its art deco styling, especially on the candlestick, and in the strong vertical lines of the pot handles. It doesn't exactly go with my blue and cream bedroom, but who cares? It's pretty! 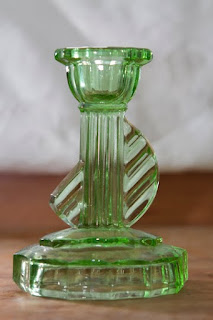 I have been seriously considering getting my hair bobbed, and feel this is a definite sign that I should EMBRACE THE DECO.
As if finding this beautiful set wasn't enough, in Scope I picked up a 1947 film annual for £5, with no scribbles in and no pictures cut out. Old film annuals are getting harder to find at reasonable prices, so I was dead chuffed with that.
I've tagged this post 1930s although I have no idea how old the set is. It certainly looks 1930s to me, given the colour and style.
Photos taken by Mr Robot.
Labels: 1930s homewares