A grand day out in Bristol 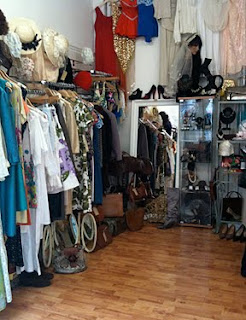 Apologies for the quality of the photos in this post; I thought I'd leave the camera at home and use my iPhone. BAD IDEA. Getting the pics off the phone was hard enough, and then they were bobbins.
Yesterday I met up with my friend Rachel to go charity shopping in Bristol. (She recently started a blog on Scandinavian and Modernist jewellery, so if you're into modern-looking gems from roughly the 1940s to 1970s, do check it out.) I'm reclusive and don't go out very often, and Bristol scares me a bit because it's so big, so having someone to show me round was brilliant. Like London, Bristol's a conglomeration of villages, so the various parts all have their own characters. We started off in the posh bit, Clifton Village, and worked our way to the Gloucester Road, which is rather more mixed in character.
The first shop of note was Clifton Vintage Boutique, in Clifton Arcade. Cleo, who owns it, had a few new pieces of silver for Rachel to look at. I found this fascinating as I know nothing at all about Modernist jewellery. I really liked this shop; it wasn't rammed to the rafters with stuff but what it did have was very nice, and there were plenty of things that I coveted, including a good number of men's hats. They don't take cards here, so I had to leave behind a very nice handbag as buying the (secondhand) iPhone has cleared out my disposable cash for July. We went round a few more charity shops and one place that felt kind of house-clearancy, called Focus on the Past. As well as furniture and pictures that had some very nice china and, at the back, all sorts of dressing table sets, jewellery and so on.

From Clifton we walked to Cotham, where there's a little group of charity shops on Cotham Hill Road. I did find a pair of brand new Miss L Fire shoes for £20 in one, but they wouldn't fit, and another had a black and yellow dinner service which I would swear was 1920s for £20 but some blighter had already bought it. (Otherwise I'd have got it home somehow, even if I'd had to pay for a taxi to Temple Meads station.) I fell in love with Cotham Antiques; they had a gramophone playing a 1920s record in the door, and lots of lovely bits of furniture and jewellery inside, and the staff are really nice.
By this point I was starting to wonder if Bristol had any plus-size shoppers as most of the stuff in the charity shops seemed to stop at around a size 14. Were my fellow big lasses clearing the shops out ahead of me? Was everyone in Bristol thin? It was most perplexing. 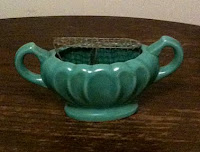 Gloucester Road was more my sort of place. For one thing, the food there is very mixed, from a top-notch bakery to a great Caribbean restaurant (I've eaten there in the past after watching cricket in Brizzle) to fab foods from every part of the world. The charity shops catered to a wider range of sizes than the ones in the posher areas - and one cancer charity actually has a separate store entirely devoted to vintage there. However, it was in one of the non-dedicated charity shops that I found my clothing purchases, a Phase Eight tartan skirt, which is modern in style but the colours will look fab with a beige 1950s jumper I'm knitting, and a silk Laura Ashley scarf. All together, £6. I also got a little vase from another shop for £4. I've been trying my hand at flower arranging lately with the help of a couple of books by Constance Spry. I suck at it, but at least it gives me an excuse to buy nice vases!
It was a great day out, and I'm definitely heading back to Clifton Vintage when I have some spending money.
Labels: Bristol shopping