Contrapular Spectacular 2012! Steampunk contraptions at Waltz on the Wye

Phew! I've just got back from this year's Waltz on the Wye steampunk festival, and I thought I'd share with you some of my favourite items from the Contraptions Exhibition. One of the things I love about steampunk is the immense energy and creativity of steampunks, and it's expressed best in their contraptions. Contraptions don't have to be functional, but they do have to be unique and made with skill. Waltz's exhibition was held in a room in Chepstow Castle, a really wonderful location and one that meant members of the public could come along and enjoy seeing the items too. Here are some of the items that were on show this year. 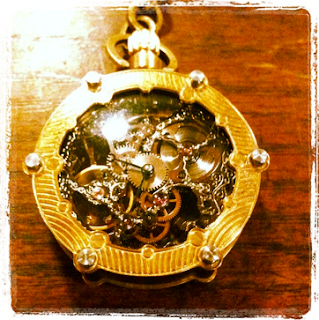 Jarkman's pocket watch was voted 'Best Contraption'. It looks a pretty thing, and it is truly lovely when you hold it. You might think, "Well, it's a watch, there are lots of watches around", but this really does exemplify the amazing craftsmanship of the contraptions. The case was machined from a block of ebony, the facing plates are custom-made and engraved, and he even machined the winder and made the chain. (Here's how he made it.) A thing of beauty, and a deserving winner. 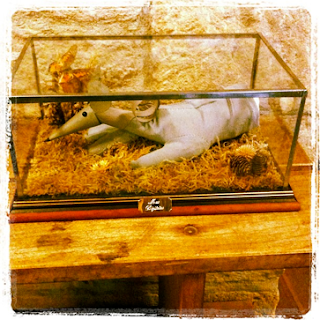 'Maus Digitalis' by Arfon Jones. Arfon is the chap also responsible for last year's frozen dinosaurs and the stuffed womble I mentioned earlier this year. No childhood favourite is safe from him - he'll probably have Morph floating in a jar of formaldehyde before long... 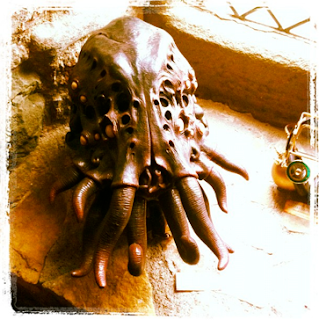 Cephalopod head by Mark Cordory. (Dr Who fans, he was Head of Department for props fabrication on the show for two years!) I don't think I met Mark over the weekend, but he had a number of items in the exhibition, all beautifully made. I liked this one for not being made from wood and brass, but being a more organic item. 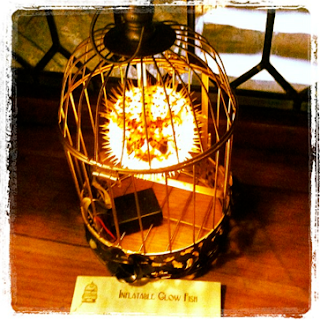 Inflatable Glow Fish by Andy Dingley, one of the festival organisers. This motion-sensitive puffer fish lights up when you walk past. Great fun.

(Now a couple of photos taken by Mr Robot on a proper camera, so in a different style to my iPhone snaps.) 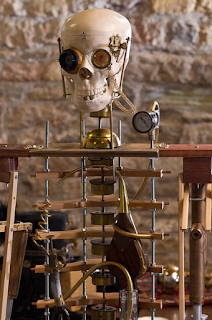 James Richardson-Brown, whose steampunk K9 was last year's winner, brought this enormous and intricate Terminator this year. It's articulated, and when the jaw is pulled down, there's the barrel of a gun behind the teeth. 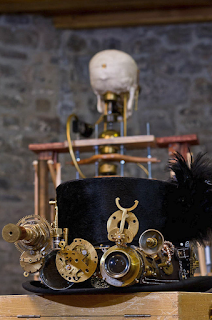 Matt McCall displayed some fantastic accessories, including this hat. (You can see the reverse of James' terminator in the background.) What's great about his creations is how functional they are: brass goggles with UV lenses in, and an incredible working pipe with all sorts of valves and widgets on.

So these are some of my favourites, but there really were too many for me to cover them all. I did a stint watching over them and talking to people about them on Sunday morning, and my head's been buzzing with creative ideas for something to make ever since. In particular, a giant tapestry of a kraken in a William de Morgan/ William Morris style. Because, y'know, It's not a contraption, but it'd look ace on the castle wall. Now, who's got some spare time?..
Labels: craft events science fiction steampunk