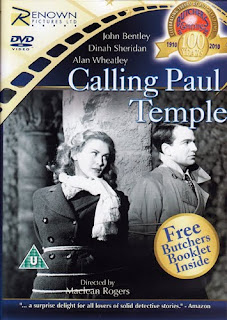 This is more like it! Although there was only two years between the release of Send For Paul Temple in 1946 and Calling Paul Temple in 1948, the two films feel as though they come from different ages. This one feels more like a complete film, whereas the latter felt like a series of set pieces.

To begin with, the cast has changed: John Bentley now plays Paul (a role he played three times) and Dinah Sheridan plays Steve. They feel like a younger pairing than the earlier one of Anthony Hulme and Joy Shelton, although Sheridan's Steve is not as glamorous as I always imagine Steve to be (Mr Robot was rather disappointed in this regard). Her outfits are not as adventurous, with a distressing number of dull shirt dresses in evidence. That said, Sheridan does have something of a 'jolly hockey sticks' quality which is appropriate to a 1940s woman who keeps getting into scrapes and adventures.

The film has the glamorous settings of the radio plays, including a nightclub, complete with band, singer and showgirls, and a very Olde English inn in Canterbury. Paul and Steve also make occasional references to the war, giving this film more of a place in time than the one before it, and there's rather more action. (Yes, Steve does get kidnapped.)

There's only one negative thing to note about Calling Paul Temple. I had some misgivings over the character of Rikki in the previous film, and this one has not eased it any. Again, I don't see his depiction as markedly different to many working-class characters in films of the period, but two wrongs – both working class and Asian characters being shown in a two-dimensional way for comic relief – don't make it right. You may think I'm going a bit off the deep end here, but I'm part Anglo-Indian myself. I don't feel that the portrayal of Rikki or the working class characters is consciously malicious, but it would be nice to see them given the same depth and dignity as the middle and upper class characters. Overall this is a very small gripe, and I still enjoyed the film, but I do feel it has to be said.
Labels: 1940s derring-do film heroes