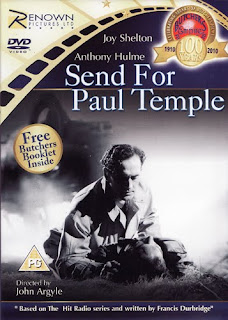 Sorry it's been a while since I last posted – I was both ill and snowed under at work, so by the time I got home each day I was too worn out for blogging (or cooking, or anything else remotely useful). Anyway, I must've been an awfully good girl this year, because on Christmas Day among the goodies under the tree were DVDs of three vintage Paul Temple films.


I've mentioned in the past how much I enjoy Paul Temple, but until now I've only heard some of the radio plays. Send For Paul Temple is the earliest of the films I own, produced in 1946 and starring Anthony Hulme as Paul and Joy Shelton as Steve. Unusually, Paul and Steve are not married in this film and Paul is living at his place in the country, and in place of Paul's cockney manservant Charlie there is an Asian manservant called Ricky. (While Ricky is not a very well-developed character, being there mainly as comic relief, I feel bound to point out that this was Charlie's function also.) Nonetheless, all the usual elements are there: a daring criminal gang with a cunning leader, police chief Sir Graham Forbes, Steve requiring rescuing, and so on.

What really struck me about Send For Paul Temple was that it had very little relation to what had been going on in the world. Steve's outfits and hats place her between the late 1930s and before the New Look, but that's the only indication that this film was made any time close to the Second World War. Street scenes are unbombed, and no mention is made of the recent, world-changing conflict. Whether it's because audiences wanted Paul Temple to be his familiar self, and they demanded some escapism I don't know – certainly Joy Shelton gets to wear some very nice outfits using rather more fabric than clothes rationing would have allowed; not even Hitler could put a dampener on Steve's glamour. This lack of reference to the real world didn't spoil the film, but it is a curious aspect of it.

Send For Paul Temple is on a different label from many of the DVDs I review, being put out by Renown Pictures, and the image and sound quality are both good. I still enjoy the radio plays more than I enjoyed this, but it's a perfectly pleasant film. The later radio plays contained more action, and I'm hoping for more in the later films.
Labels: 1940s derring-do film heroes