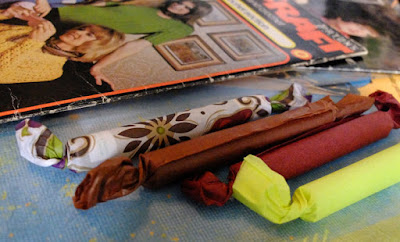 The weather may have turned horrible - we're on a Yellow weather warning for rain down here in the south-west of England - but the postman brightened my day up no end. Today I had two parcels waiting for me when I got home.


I'd been expecting the first, though I had no firm date for its arrival. It was my four perfumes in the 4160 Tuesdays 'The Mystery of the Materials' series, all wrapped up neatly like little bonbons. I opted for the package with four 9ml bottles plus a storybook, though they did say the book would probably arrive later than the perfumes. Each perfume will have its own story inspired by the mystery stories of the 1930s. In a way I'm glad they've arrived before the book, as it will give me a chance to assess each one independently of any narrative. I'll do a review later in the month.

The other parcel was for a giveaway I won a while back, from Jennifer at Little Yellow Cat. She'd been busy and I'd forgotten it was on its way. I don't mind waiting for things; I'm pretty patient, plus I always feel if one thing doesn't turn up, another very well might. Jennifer included some lovely vintage buttons and postcards of Australia in the parcel, but the big attraction for me was the patterns. There was a packet of 'Semco Reliable Transfers' - Aussie embroidery transfers! One, of a basket of flowers tied with a ribbon, is especially pretty. 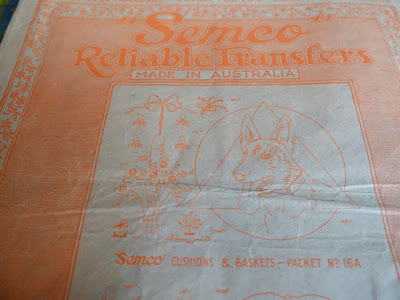 Then there are the knitting patterns. I think my favourite is The Lux Book: Knitting Designs for 1950. The editor's letter states that 'The Lux Knitting Book is back, back after 8 years of wartime restriction and paper shortage'. Can you imagine how it must have been to go without new publications, back in an age before we could get words electronically? It's a bookworm's nightmare, for sure. Among the Lux patterns is a lovely jumper with a stitch pattern exactly like that of my navy cardigan. I'd always thought that particular cardigan pattern dated from the late 1940s or early 1950s, so it's reassuring to see another design from that time using the same stitch pattern. The other pattern booklets that came in the parcel are from the 1960s and 1970s, and include a book of bedjackets. I do love a good bedjacket. Maybe one day I'll actually get round to making one. 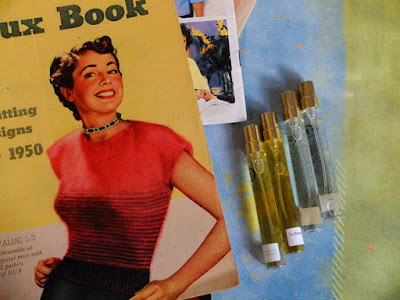 I hope the weather is not as awful where you are - or if it is, that you too have had a good post day.
Labels: knitting perfume