Bathroom complete - after a horrible week!

Before I tell you anything else, I'd better get the horrible week bit out of the way. Ziggy, one of our two kittens went missing. We saw him at midnight on Wednesday, but he didn't show up for breakfast on Thursday morning. This might not sound like much, but because they were born feral, the kittens are VERY greedy, and pretty much inseparable. We'd wanted both anyway, but the charity wouldn't have let anyone who wanted to separate them have one. They had to be together. At first, if they couldn't see each other, they'd cry hysterically. They've got better in the months since we've had them, but they are still very attached to each other - if Pippin walks into the room and mews, Ziggy immediately gets up and goes over to her. So, you see, missing food and not being with his Pippin was very unusual for Ziggy, and we were worried straight away.

He still wasn't home after work, though we walked round the local area calling for him. I'd made a few flyers that I put through neighbours' doors. (I was so upset that I got our house number wrong, despite having lived here for 15 years, so I should probably apologise to my next-door neighbour!) He didn't come home that night at all, and we were utterly miserable.

Next morning, still no Ziggy. I emailed local cat rescue charities, tweeted, did Facebook posts (there's a local lost/found pets FB group) and made even more flyers, this time bilingual English and Polish as we have a lot of Polish people living locally, and I thought it might help to make the flyers more readable. Battersea Cats and Dogs' Home tweeted me and pointed me to their list of Things to Do on their website, including putting dirty laundry in the garden as a sort of 'scent beacon'. After work we flyered all round the area, and that's where we struck lucky. One lady who has a cat a lot like Ziggy said she'd seen him down the road a little way, and noticed him particularly because he was so similar to her Max. Another group of ladies chatting over a wall said they'd seen him outside their homes the previous morning - and that was a MASSIVE relief because it gave me hope that he was alive, and wasn't trapped anywhere. Still no Ziggy, though. Pippin was distraught, so clingy and mewly.

We went to bed feeling miserable and then at about 1am on Saturday, just over 48 hours after we'd last seen him, I was woken up by mewing. I realised there were two cats in the room, but didn't dare to believe one was Ziggy... I turned the light on and it WAS Ziggy! Nervy and very hungry, but safe and sound. So, I definitely recommend patrolling the area to leave a scent trail, and piling grubby clothes in the garden as a scent beacon, if your cat goes walkies. I'm sure that's what lured him back. He slept a lot yesterday; I don't think he'd had much rest during his 'adventure'. And Pippin was as pleased as we were to have him back. 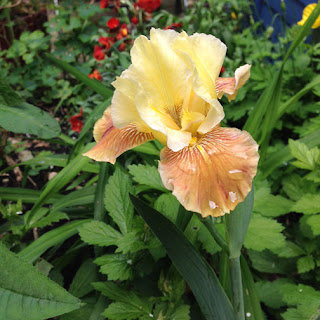 When I'm not piling stinky pyjamas on my lawn, my garden's got some nice things growing right now. This iris is new. I'd always wanted one, so when Pete gave me gardening vouchers for my birthday, I treated myself.

And here's the bathroom! Dan the Plumber put in the new suite and did the tiling (the tiles are Hoxton from The Bath Store), and even built the custom tiled bath surround.

Pete and I did the painting, and Pete sanded the woodwork and I put several coats of dark varnish on it. I'm really pleased, it has that 'Victorian Explorer' vibe we've really been going for. When we go to Spain, we're going to be keeping an eye out for anything nice that might look good in there, possibly a new mirror or some nicer pots for the orchids. The orchids remind me of my McDonald grandparents; granddad used to collect them as a boy in Burma, while Nannie turned out late in life to have a tremendous talent for getting them to flower. I bought these orchids when I got the iris. Might as well have Asian flowers in a Victorian Explorer's bathroom, no?