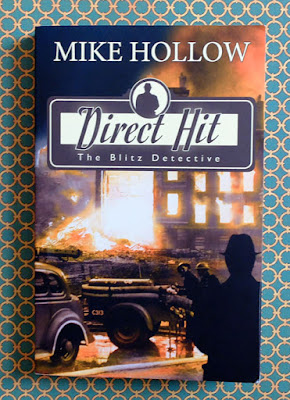 Foyle's War has been one of my favourite things on telly in recent years, and I'm going to miss not having more programmes starring Foyle and Sam, so when I spotted this 1940s-set crime novel in the Oxfam bookshop in Bath, I pounced. Could it fill in the gap?

I've read a lot of crime fiction set in the past, both written at the time and written as historical crime fiction, and there is always a big difference. Attitudes and social subtleties that a writer in, say 1937, might expect a reader to understand instinctively are generally explained by writers in the twenty-first century. A big part of how much I enjoy historical crime fiction depends on how well the writer balances anachronism (because modern readers probably wouldn't like a lead character expressing some of the more commonly-held attitudes of the past) and reality (because it's awful when you read a book where it feels like all the characters are people from now all gussied up in fancy dress). Mike Hollow balances that well, I think because his parents were Londoners who lived through the Blitz - he explains this in his afterword - and so he has an emotional appreciation of the time and place he's writing about.

In this novel, Detective Inspector John Jago, a policeman in West Ham, is called out to look at a corpse discovered on the first night of the Blitz. A corpse which they get only the briefest chance to examine before it is destroyed by a bomb. Jago and Detective Constable Cradock investigate, and discover a case that has as much to do with the Great War as it does the current one.

I very much enjoyed the East End setting; so much of historical crime fiction is written about the middle and upper classes. Hollow recreates West Ham and its inhabitants in an unsentimental yet dignified way. I was also struck by the amount of reflection on the First World War; it's something I don't often come across in crime fiction written or set in the 1930s and 1940s, despite the fact that it must have had a massive impact on people's lives. As a WWII veteran, Jago is affected viscerally by the Blitz. I'm not familiar with the history of the Blitz in detail, but the accounts of bomb damage, Anderson shelters and the like have a real ring of truth.

It's not perfect: one character is a young, go-getting female American journalist, and she did feel very much shoehorned in. Whether this was to usher in discussions of the British class system, the wider impact of the war, or because someone somewhere decided there had to be a woman and preferably one who could develop into a love interest I don't know, but for such a prominent character she didn't really add much to the story. Likewise, too many threads come together at the end of the book; it feels implausible.

I did really enjoy Direct Hit, though, and I see from the official Blitz Detective website that there's a followup so I will look that up, probably on Kindle.
Labels: 1940s books crime WWII