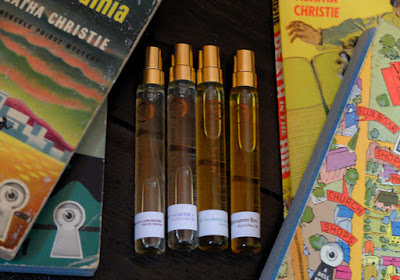 When I saw that 4160 Tuesdays were fundraising via Indiegogo to create four new perfumes, all inspired by 1930s murder mysteries, I was intrigued. I love perfume, I love vintage crime novels, and I try to fund kickstarters every once in a while because I believe in giving people the chance to create beautiful things and follow their dreams – we all need dreams. I joined in, and received my four spray vials recently. I'll be getting a book to go with the perfumes, but that's being shipped later than the scents. This is a good thing, as it meant I could try each perfume on with no preconceptions, then look up the notes the perfume company says it has, and I guess I'll see if it goes with the story when the book turns up.

Captured by Candlelight
I got: strawberries and Scalextric. Yup, seriously.
The company said: traditional plum pudding, covered in brandy and set alight, with a background of oak panels and oil paintings 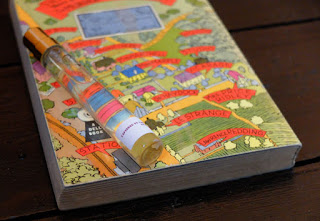 Scalextric (what is Scalextric?) has a very distinctive hot metal smell when you've been playing a while, and on spraying this, I got a big blast of strawberry Chewits with the Scalextric smell underneath. I don't actually like strawberry sweets, so thought the Scalextric improved things considerably – Caron En Avion, one of my favourite perfumes (and from the 1930s) also has an odd metallic note that I really enjoy. I didn't get anything from the company's own description. I tried another spray, and got a faint whiff of brandy that burned off extremely quickly, plus some chocolatey notes, but no Christmas pud. Perhaps the hot metal was supposed to be the whiff of candle smoke. I will wear the rest of the bottle, but I wouldn't buy any more of this.

Flora Psychedelia
I got: rose and a bit of citrus, but not for long
The company said: a blend of rare flowers with intoxicating spices and herbs

I really liked the initial blast of this one, which had a lot of rose plus something fresher, like bergamot and perhaps a bit of jasmine. It's not psychedelic, it doesn't swirl and change enough for that, but it is very lovely. I didn't get much spice. It's ladylike with a little bit of bite - I'd say it's like shotgun-toting Hils from Jekyll and Hyde. I'd like this a lot if it lasted a bit longer. It felt summery and light. Unfortunately it was so light it drifted away within an hour or two of spraying.

Up the Apples and Pears
I got: apple sweets and dark woods
The company said: autumn fruit in a tiny London orchard

As with Captured by Candlelight, the fruit notes I smelled in this didn't smell like fresh fruit, but like a confectioner's stab at it. I mentioned that I don't like strawberry sweets – well, I don't like apple ones either! The woods save this one, being very dark and very prominent, smelling to me like there's a lot of patchouli, and balancing out the sickly apple in a way that actually works. This is actually quite a sinister scent in its way, and I appreciate that. The cutesy name – cockney rhyming slang for 'up the stairs' – and apple-candy note make it seem quite childish at first, but then there's that darkness beneath. It's Bette Davis' 1960s film roles, mixing the artificial infantility of Baby Jane with the decaying house from Hush, Hush, Sweet Charlotte. 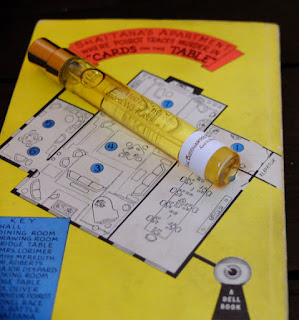 The Buddhawood Box
I got: sandalwood, and woody scents I couldn't identify
The company said: four distinctive woods, with a note of multicoloured opalescence.

I loved this one. After the first three had proved thought-provoking and wearable but lacking in wow, I was braced for another 'meh'. What a surprise! Lots of sandalwood, patchouli and other woody notes. All that wood could give The Buddhawood Box a very hippie feel, but there's a complexity to it, and it's quite delicate, not the overwhelming patchouli blast of a headshop. That said, it's got lasting power. Of the four Mysteries, it best suits its name. I'll be taking this on holiday with me, as it will be magnificent on a sultry night in Seville or Granada.

The longevity of the scents, aside from The Buddhawood Box, was a tad disappointing, and although it wasn't stated, I had expected perfumes based on 1930s-set murder mystery stories to have something more of the 1930s about them. The 1930s connection is a red herring, really. If you want a 1930s scent, buy one formulated in, or before, the 1930s. I'd been feeling a little cynical about the set – one absolute corker, a lovely but vanishing floral, and two sinister-sickly scents that could be summed up as Revenge of the Chewits – but then I read a perfume press release for a new (and very pricy) scent from a long-established company that nonetheless chases the mass market. I realised I knew what that one would smell like, because it would smell like so many other things, and it would be boring. You can't say that about these. I'll take strawberry Chewits and Scalextric, created with passion, over another pink-pepper-and-cupcakes combo created with one eye on the mass market any day.
Labels: 1930s perfume