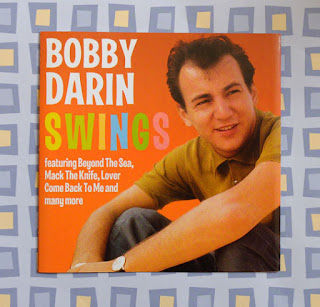 Where we got this CD is an absolute mystery to me. I think we must have inherited it from Mr Robot's mum, because I'd have been playing it much more if I'd known we had it.

We already own a CD called Sinatra Swings, and were a little disappointed in that. I have reviewed it (here), but in short, it wasn't as upbeat as we'd hoped for. This Bobby Darin CD has all the swing we wanted, the cheek and confidence of 1960s Las Vegas.
Two tracks I've always really liked when performed by Bobby Darin are 'Mack the Knife' and 'Beyond the Sea' (you can thank The X-Files for getting me into the latter). Both are included on this disc, but as live versions, which I think is great because I've already got the original recorded versions. The live ones are close enough to those to have the same magic, but you can really hear Darin having fun with them.

There's not a duff track among the 18 on this disc, though. 'After You've Gone', 'Lover Come Back To Me' and 'Mame are my favourites. I prefer Darin's version of 'The Shadow of Your Smile' to Sinatra's, and his version of 'Feeling Good' actually sounds like he is feeling good, which is pretty rare. (Honestly, why do so many versions of that song sound like the singer's one step away from breaking down into miserable sobbing?)

I thought most of the tracks on this were from the 1950s when I heard it, so it was a surprise to realise most were recorded in the 1960s and 1970s. That said, most of the songs are standards from the first half of the 20th century. I guess it's Don Draper in album form!
Labels: 1960s 1970s Music