The Hitchhiker's Guide to the Galaxy Radio Show Live 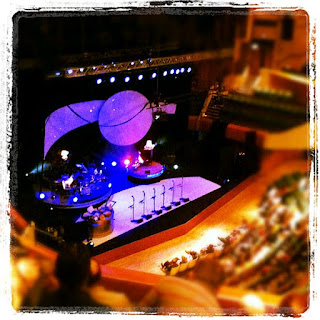 The Hitchhiker's Guide to the Galaxy Radio Show Live is currently touring the UK. We only heard about it on Wednesday and the nearest date on the tour to us, Cardiff, was on Friday, but we had to go. (Usually Mr Robot and I like to plan at least a month ahead; spontaneous is not the word for us.)

The fantastic thing for us was that the original cast, barring Peter Jones, the original Voice of the Book, who died, was going to be performing. We couldn't miss that! Different well-known people are taking the part of the Voice of the Book at the shows, and at Cardiff it was Phill Jupitus.

You can see the stage set in the photo. (I didn't take any of the performance as we were all asked not to take photos or make recordings.) The band were on the big round dias to the left, with the desk for sound effects just in front of that. The round dias on the right, with comfy chair and standard lamp, was where the Voice of the Book sat. Extracts from the book were beamed onto the big round thing hanging at the back of the stage.

It was  a great set, and I loved being able to see the sound effects being made and having the soundtrack being performed by actual musicians. In fact, there were many good things about the show, not least hearing the real voices, the ones we've loved for years. Before we went, a friend who'd seen the show commented that the first half was good, but the second half not so good, and now I've seen it, I agree with them. There's simply too much in the books to shoehorn it all into one show, and I'd expected the show to consist of roughly the same storyline as the first series of the original radio show and the TV series. The first half got to the point of the shootout at Magrithea, following the familiar plot. Unfortunately the second half is very bitty, with lots of references to things that are never explained, so you'll need to be a Hitchhiker's fan already to follow it - I feel sorry for anyone who went who isn't familiar with the later radio shows (based on books by, but not written by, Douglas Adams). Mr Robot is a huge fan of Douglas Adams' work and even he didn't enjoy the second half.

There were also some excruciating attempts to encourage audience participation. Personally, I went to hear the original radio cast, not sing 'Share and Enjoy', and from the lack of participation in general I'd say most of the audience felt the same way. Perhaps a better script, creating a show that people could genuinely warm to, would have encouraged more participation; it was hard to feel warm and fuzzy about anything in the second half, and a disengaged audience aren't going to join in.

If you have any interest at all in Hitchhiker's, I'd say you have to see it, if only to see the original cast. It's wonderful hearing those voices again, live. But the first half is vastly better than the second because of the poor script, so if you have to leave early to catch a bus or train, you really won't miss out on anything.
Labels: 1970s radio science fiction theatre