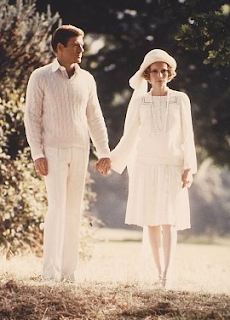 The Great Gatsby is one of my favourite books of all time, and with the Baz Luhrmann film due out this year everyone's talking about it. BBC Radio 4 broadcast it a few weeks ago as the Classic Serial - I'm not an American so I've no idea if the accents are genuine, but it sounded jolly good to me and I've Tivoed it. I'm not 100% convinced by the soundtrack on the trailer to the Luhrmann film; I love 1920s music and wish that had been used, but I suppose then it wouldn't be a Luhrmann film. I hope it inspires people to go out and listen to the real thing.

I've also loved the 1974 film of The Great Gatsby for years. Some people don't like this film because it's too 1970s. I often say I don't like the 1970s, but that's not true, because I adore the 1970s nostalgia for the Edwardian era to the 1940s and Gatsby is part of that. It has a dreamy quality like Sarah Moon's photographs, overexposed so there's a blinding sunlight over many scenes (especially the ones where Gatsby and Daisy are together) and a gritty taking in of every detail in others. Mia Farrow makes a wonderful Daisy, ethereal and never quite present even when she's taking up the whole of the screen. Robert Redford makes a wonderful Gatsby, so earnest in his pursuit of a lost love.

While Daisy is light and airy, as Gatsby wants her to be, Myrtle (mistress to Daisy's husband Tom) is earthy, the opposite of his idealised woman. Working class Myrtle gets drunk, has a shiny face, swears, has sex, while Daisy floats along in a rich dreamworld, untouchable even though married and a mother. Yet as vulgar as Myrtle and her relationship with Tom are, that's not what ruins everything. Myrtle knows her place, and Tom is careful to keep her there. Gatsby refuses to accept his lot in life, and his attempts to rewrite history result, ultimately, in tragedy.

The film stays very true to the book. For me, The Great Gatsby is ultimately the story of the futility of dreams and the cast-iron of the class system, which the 1974 film conveys perfectly.

See the trailer for Baz Luhrmann's The Great Gatsby over at The Guardian.