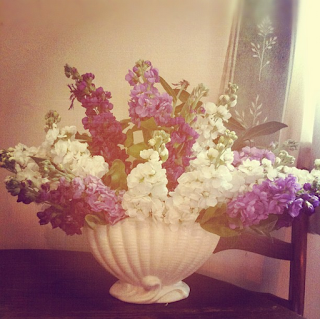 Constance Spry is one of my icons. While chefs like Elizabeth David and brands like Horrockses are remembered, Constance Spry has faded in the national consciousness. She ran a domestic science school with her friend Rosemary Hume. I think this Bank Holiday weekend is a good time to remember them both, because they played a part in 1952's Coronation. Rosemary Hume designed a dish for the Coronation lunch which has, in the following 60 years, been adapted, simplified, cheapened and become familiar to everyone in some form or other: Coronation Chicken. Constance was a florist and created lavish floral decorations.

The Coronation lunch was held in the hall of Westminster school, Constance Spry described it in her book, Party Flowers: "this stately hall was badly damaged during the war and its dignity is marred by a temporary roof. The walls too have been robbed by fire of panelling and are pitted and scarred..." Quite a lot for flowers to do, as she realised. "I went off to talk to my partner Valmar Pirie... and we quickly realized that the effect we visualized could not be got with flowers alone. Fortunately Sir David had also asked us to undertake the catering, and at the Cordon Bleu school Rosemary Hume was planning menus and methods. This combination gave us scope, and we finally decided to suggest a scheme in which the long serving-tables down the sides of the hall would be draped in gleaming gold, the table-cloths would be of blue, and the flowers of glowing scarlet." In that time of post-war austerity, when everything was in short supply, they were very lucky with the flowers. The mayor and people of San Remo sent a delivery of wonderful blooms as a gift to the Queen. After the luncheon, the flowers were sent to hospitals for more people to enjoy.

I have three books by Constance Spry: Come Into the Garden, Cook (a book of wartime recipes, although mine dates from after the war), How to do the Flowers (1953) and Party Flowers (1955). Inspired by the flower books and the Jubilee, here is an arrangement I did yesterday. The flowers are all stocks, which I love for their scent. You don't need nasty synthetic air fresheners when you've got an armful of these in the room. I didn't have any oasis (the green foam florists use) so I had to rely on the bulk and weight of the flowers to hold themselves up, but luckily the vintage Sylvac vase has done a lot of the arranging work for me. Party Flowers contains several photos of the Coronation displays, and they too had this dense pyramid shape, although in much more exotic blooms and, of course, the rich reds Constance Spry had wanted.
Labels: 1950s craft homewares