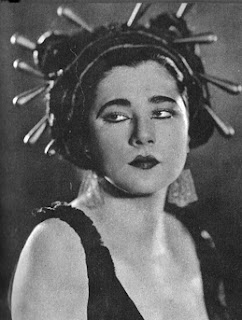 Miss Dooley was born in New York in 1894. (Her true first name is uncertain, with sources claiming Mary, Nonna and Anita, all names that Nita herself said had been her name! The Rudolph Valentino Society have done research into it and Nonna does seem most likely to have been the true one.)

By the time she was 20, with her mother dead and her father absent, she had two teenaged siblings to look after, and started work modelling for artists. In 1918 she got her first job on Broadway. By 1919 she was performing in the Ziegfeld Follies, the Dooley girl was gone and Nita Naldi now trod the boards.

Her first major film role was in Dr Jekyll & Mr Hyde, opposite acting great John Barrymore. She had luck with her leading men, vamping it up as Dona Sol in Blood and Sand opposite Rudolph Valentino. The two worked well together and she later acted alongside him in A Sainted Devil and Cobra. The camera loved her long eyes, oval face and dark hair. She also posed, topless, for Antonio Vargas, and acted in Alfred Hitchcock’s second film, The Mountain Eagle. Her last films were released in the late 1920s, and she never made a talkie.
Labels: 1920s forgotten bombshells