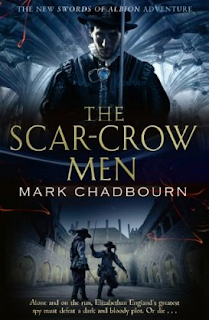 Rhian of The Crafty Geek gave me the follow-up to The Sword of Albion. Interestingly, she didn't like this one as much as the first novel, but I preferred it. This may be because it's more of a murder mystery, starting with the death of playwright Christopher Marlowe (a real-life event which is still debated to this day). Also, Grace is far less annoying. In the first book she was determined to find out whatever Will Swyfte was up to, which led to her wandering into one of London's criminal 'rookeries', getting abducted by Spaniards, and generally being the most annoying creature on the face of the planet. I've nothing against stong female characters, but Grace was an idiot; steaming thoughtlessly into every dangerous situation is not strength. The Irish assassin, Red Meg O'Shee, is a fairly stereotypical female adventurer, but I don't read swashbucklers for deep character development and intricate portrayals of the human condition, I read them for excitement and fun.

Anyway, in many ways it's similar to the first: the fairies are once again up to no good and Will and the other agents of Walsingham - now deceased - are forced to stop them, complicated by the fact that after Walsingham's demise power struggles at court have weakened the position of the new head of their faction. Eventually, they are as at much risk from their fellow humand as they are from the fairies. I still love Chadbourn's careful blending of fact and fiction, and very much enjoyed this book. I wasn't quite so keen on the ending, but it was tremendous fun getting there.
Labels: alternate history books derring-do Tudor