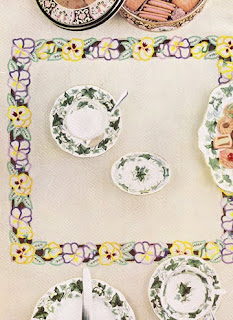 If you’re into early 20th century styles, you can’t beat a bit of cutwork. It certainly featured on cutwork and clothing from the 1910s onwards. At its simplest, it’s outlining a shape in buttonhole stitch and then cutting fabric away to create a lacy look. Like most embroideries, it did evolve in style. The embroideries from the 1910s that I’ve seen have a lot of curlicues and s-shapes, a lot like you’d expect from Edwardian print ornament or silverware decoration.

Most of my magazines are from the 1930s and later, and by the 1930s there are many more natural shapes, with flowers being especially popular. I’m not sure when the designs that look like a flower within a shape (usually a circle, but could be a triangle or other geometric shape) came into vogue, but they’re definitely big by the 1930s. They do have a deco feel, don’t they? On this page you can see a 1930s design from a magazine, along with the free gift of a piece of linen printed with the design to turn into a handkerchief sachet! Still with the magazine 80 years on...

The cutwork I’ve seen from the very start of the 20th century was white-on-white. I’ve seen self-coloured cutwork on 1920s garments (eg green embroidery on a green background), and some subtly contrasting work from the 1930s (eg white embroidery against pale blue linen, such as the sachet scanned in on this page). My 1930s patterns include instructions for doing cutwork on nightdresses and blouses as well as tablecloths, napkins and the like. I haven’t seen much from the 1940s, possibly because things like fabric transfers and, indeed, the fabrics themselves, would have been hard to get hold of, but there is still some, such as the dressing table set on this page.
By the 1950s the designs I’ve seen tended to be confined to homewares, not put on clothes, although whether that was because it was easier to buy lengths of broderie anglais and whitework fabrics I couldn’t say. What is certain is that in the patterns from the 1950s you see lots of colour in cutwork, for example the pansies outlined in dark purple and yellow with their leaves edged in vivid green at the top of this page. 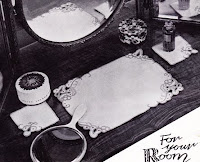 Despite the addition of colour, the floral 1950s designs aren’t as different from the deco-feeling 1930s ones as the 1930s ones are from the rococo Edwardian patterns. Perhaps it's this lack of modernity that led to its decline; the 1950s cutwork patterns feel a little dated for their time, and my guess is that they were aimed more at an older generation, and by the 1960s cutwork is not at all trendy. Where it is used, it's confined to things like tablecloths for afternoon tea – and who thinks of the 1960s as a decade of afternoon teas?
Labels: 1900s 1910s 1920s 1930s 1940s 1950s craft embroidery