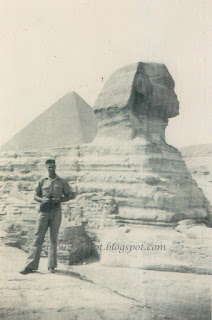 I wasn't planning to do a post about Remembrance Day, but now I feel the need to. I do feel it's a very important day. I know some older people refused to speak about the war - Mr Robot's grandmother wouldn't, and my own former-land-girl grandmother won't. However on my father's side of the family there's a fairly long tradition of service in the armed forces, so I grew up with the stories.

My grandfather, who was career army, transferred from the Indian Army to the British in the 1930s. He was serving at Alexandria when World War 2 broke out. As part of the Science Corps (pathologist/bacteriologist), he was attached to the 8th Army, and among other things was present at Monte Cassino and helped in the clear-up at Belsen. Belsen was one of the things he spoke about to the end of his life, not the sights, but the smell. He was present for the post-mortem on Himmler.

His brother Bunny died at the Battle of Sittang in Burma. The account of his death – he's referred to as WA Macdonald – can be found here.

My grandfather's family was mixed race. They were not unusual. Only two out of every ten soldiers who fought in Burma were white. 90,000 West African soldiers fought in East Asia. Soldiers from the Caribbean fought in Europe. 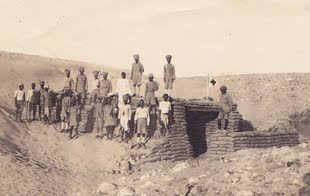 What I'm trying to say is, tomorrow if you're at a wreath laying or see footage of the ceremony at the Cenotaph on telly, don't forget all the other soldiers, the ones who weren't white and may well not have spoken English. This wasn't a war about Britishness or, as some posts on Facebook seem to have reduced it to, Englishness. Remember all the soldiers who fought and died for freedom, all the countries who lost sons and daughters.

And then remember the Axis troops who died, and the civilians. Because war is a horrible thing, and human lives are precious.

Photo: Top is my grandfather McDonald. The photo was allegedly taken on the day that war was declared. I've watermarked it because it it precious to me, and if you misuse it I will hunt you down and eat your liver. The second is one from his photo album; I know nothing about them, sadly.
Labels: 1940s aargh robot data WWII