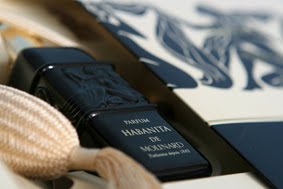 Some days, you just have to bring out the 'big guns', and today was one of those days for me. We're redesigning the magazine I work for, and while I can't go into details, what I can say is that a ground-up reworking like we've been doing means an awful lot of work, almost as much as creating a new magazine from scratch, and this week that's included working into the evenings. On top of that, I've had a pile of freelance come in, and I've been working on a Comfort Blanket for work's campaign in support of Refuge. It hasn't left much space for fun or glamour.

This is where the Habanita comes in. Definitely fun, definitely glamorous. It was first made in 1921, and inspired by the beautiful cigar girls of Havana. I mentioned it briefly in my Vintage Guide to Perfumes: Up to 1940, and described it as 'tobacco and flowers'. However, the tobacco isn't the ashy, smoky sort of scent you get in something like Caron Tabac Blonde, rather it's a fruity, juicy sort of tobacco like the scent of pipe tobacco before it's lit. (I dare say it's supposed to be more like a Cuban cigar, but it definitely reminds me of pipe tobacco.) The original was made to be put on cigarettes to scent the smoke, which I'm not convinced improved the healthiness of smoking at all. By 1924 it had become a conventional perfume.

Robin over at Now Smell This describes it thus: "If you can imagine dousing yourself in baby powder, donning an old leather jacket and then smoking a cigar in a closed room with a single rose in a vase 10 feet away, you’ll get the general idea." That's a far better description than I can manage! I think it's that combination of the comforting and the decadent that makes it so appealing.

I don't usually get comments on my perfume. It tends to sit very close to my skin, which I actually like as I think an over-intrusive scent is quite vulgar, an invasion of people's personal space. Habanita is one that tends to have more sillage (a scent trail). I should imagine on many people whose skin pushes perfume out more it could become offensive. Before buying perfumes, nowadays I prefer to get hold of a sample vial and give them test-runs so I can see if I like them in all stages - most change over time on the skin - and can bear them for a whole day. Habanita is one that does get noticed, and always favourably.

I bought my sample, and then my bottle from Les Senteurs. I got a complete bargain; a bottle of the pure parfum for half price.
Labels: 1920s perfume