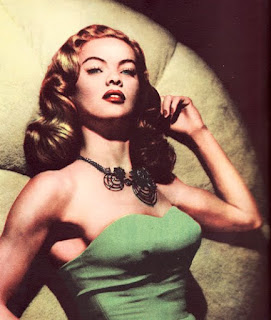 'Eunice Westmoreland' might not sound very exciting, but this lady entered films as the much more interesting 'Rita Rio', and worked under that name in the 1930s before becoming Dona Drake in the 1940s. She worked in vaudeville in the early 1930s, and was a talented singer and dancer before she even reached Hollywood, and continued to perform on stage in between films.

During the mid-1930s Dona – then Rita – was questioned by the FBI over the murder of mobster Louis Amberg. She denied knowing who he really was, but had been identified as his girlfriend.

While Dona Drake may have been largely forgotten, lovers of old films and screen goddesses will certainly have heard of her husband, costume designer William Travilla, who designed the clothes for Gentlemen Prefer Blondes, How To Marry A Millionaire and The Seven Year Itch. He knew a beauty when he saw one, and hung onto his bombshell until she passed away in 1989.

See Dona dancing with Eddie Cantor in this YouTube Clip.
Picture is from a vintage film book, Preview 1950 - a colourised photograph that looks more like a drawing than a photo!
Labels: 1930s 1940s 1950s forgotten bombshells