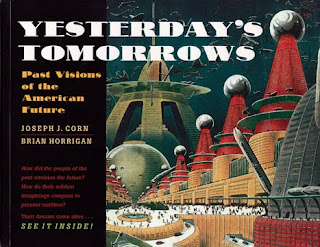 I picked this up at the Out of this World exhibition at the British Library, (which ends tomorrow, so get down there if you're interested in seeing a treasure trove of SF books). Originally Yesterday's Tomorrows was a travelling exhibition organised by the Smithsonian in the 1980s. It's a wonderful exploration of how past visions of the future tell us a lot about what people at that time actually thought about their present, and how those portrayals of the future came to shape society. They didn't affect us in the sense that we all got jetpacks or hovercars (and I'm still waiting for a moon populated in silver-hotpanted-hotties with purple bobs, thank you very much UFO...) but in the way we saw future happiness being created. Progress was expressed in things, the meal-in-a-pill, the self-cleaning-house, the car of tomorrow, rather than in social movements and interaction. 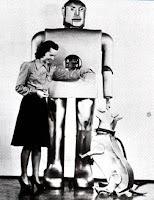 I think my favourite chapter is on the Home of Tomorrow. Despite all the labour-saving devices and new materials, there was still a Housewife of Tomorrow; in the minds of people envisioning the future material changes would come and technology would come on in leaps and bounds but women still weren't getting out of the kitchen. Their shackles were just a bit shinier and more futuristic. Then there are the depressing 'atom bomb' houses, because people were that convinced nuclear war would make them necessary. The bomb might drop, but you, your husband and your 2.4 children could still enjoy family meals at the table and play board games all night!

It's not a depressing book, though. It's good fun seeing the retro-futuristic settings, the streamlined cars and wonderful things like personal helicopters. I'm quite happy that none of them came true, though.
Labels: books retro-future science fiction