The Curious Case of the Clockwork Man [books] 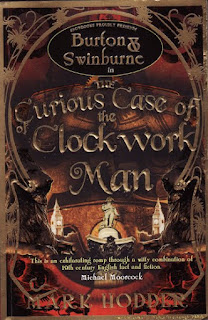 Hullo! I've just spent ten days in Seville as Mr R and I returned to our honeymoon hotel to celebrate our wedding anniversary, although through the magic of Blogger timed updates you may not have realised that as the Robot trundled on without me. In the run up to going away I had a serious amount of work going on, including reviewing four books for SFX in two weekends (fortunately none of them required much reading around; if I get a later volume of a series I'm unfamiliar with, I'll often buy and read the rest to bring myself up to speed).

Anyway, I was determined to spend my holiday reading things I really wanted to read, and I bought The Curious Case of the Clockwork Man by Mark Hodder in Trowbridge Waterstones the week before we left.


It wasn't until I got it out on the plane that I realised it was the second volume in the series. Richard Burton (the explorer, not the actor) and Algernon Swinburne (the kinky poet) encounter a policeman trying to work out where a clockwork man has come from. The man has run down. Burton quickly realises this is a ruse to distract the technologically-minded policeman from his beat, and something nefarious is happening elsewhere along it – it turns out to be the theft of a set of mysterious humming black diamonds. Who has stolen them? What power do they have? And why, later, are people accepting a patently fraudulent claimant as the long-lost heir to a wealthy family, to the point where the poor and working classes are prepared to riot in support of him? It's up to Burton and Swinburne to discover the diamonds' power, find out who stole them and make society stable once more.

What I really liked about this book is that Hodder knows his history, with the plot being an off-the-wall variation on the true Tichborne Case. There's also a nicely convoluted time travel element, which I don't want to say much about for fear of spoilers, and Hodder has thought hard about how altering historical events or introducing new technologies early would change what would later happen.

I've read a few books, steampunk and non-steampunk, over the past couple of years, that are constructed entirely out of set pieces, with heroes flipping from one exciting situation (a battle on a steam train, say) to another (being beseiged in a building) almost as though they're levels in a videogame. The narrative is linear, and the story in those cases hold the reader's interest through a succession of thrills. This is better than that, more complex and ultimately more satisfying, while still packed with adventure. I'll definitely buy the first volume.
Labels: books derring-do steampunk