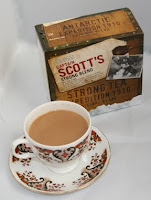 Tea like it used to be? For me that's PG Tips, which we always seemed to have while I was growing up, although nowadays I drink fairtrade tea. However, I spotted this in Tesco and decided to give it a try as the supermarket has got together with the blenders of the tea Captain Scott took on his ill-fated Antarctic expedition of 1910-13 to reproduce it in teabag form. (I did not see it as a leaf blend.) Five pence from every pack sold goes to the Antarctic Heritage Trust, which is preserving the huts Scott and his men used a century ago.
So, what's the tea like? It's good and strong, but not as tannin-heavy as I'd expected – the pure Assam a local café sells definitely has more of that 'mouth tightening' quality than this one. It would make a perfectly acceptable breakfast drink (in fact, it just has!), and if you like strong tea, as I do, you could drink it at any time of day. I daresay Scott and his men did. However, having bought it once, I think I'd prefer to stick to my fairtrade tea (ActionAid has plenty of information about the treatment of workers in the tea trade) and just send my money straight to the charity. It's nice, but no nicer than the other strong blends I drink.
(Photo is mine; the cup is one I got from the first Mrs Stokes Secret Tea Party, and is a 1970s Colclough. YES, 1970s!)
Labels: 1910s drink