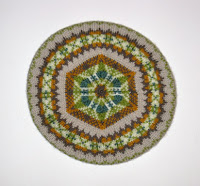 It seems like I’ve done nothing but go places recently, but in between times I did manage to knit this beret from my old Patons Fair Isle hats pattern (estimated date: 1960s). Once I’ve made a few more, I’m going to parcel them up and send them to Jill in my firm's London office, who sells woolly hats to raise money for a cancer charity, thereby achieving three things: using up scraps of yarn that would otherwise be thrown out, raising money for a good cause, and getting a little bit of vintage style onto the streets.
One thing everyone comments on is the colour scheme. Picking colours for a pattern like this is pretty tricky. First, you need a background colour. Then you need three dark and three light colours. That sounds easy, but choosing six shades with enough difference for the pattern to be distinguishable yet enough similarities to look good beside each other is actually quite tricky. For this one, it was all built around the orange-ochre colour, which I got a part ball of and was desperate to use. I had originally planned to use red instead of the cypress green, but on the bands it ‘popped’ too much, overwhelming the other colours. The cypress was one I’d set aside thinking it was too similar to the other green, yet it looks fine.

I have to admit, this is not a vintage colour scheme. I should have a go at knitting a hat or two in the original colourways, but they always look too gaudy to me. Still, I’m not knitting them for myself! 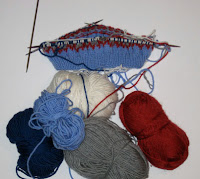 Here's my next charity hat in progress: I'm working 'in the round', and if you're not a knitter that can look daunting but it's actually really easy, and avoids seams. I like seams in some things, such as jumpers, as they add structure, but in my opinion they have no place at all in hats, socks, or mittens. I've used the red that didn't work in the green one. The base colour is quite a powerful shade of blue, so the red provides a strong enough contrast for the rest of the band.
Labels: 1960s clothing knitting