Steampunk outfits: what I wore to Waltz on the Wye

Over the past few days I was at Waltz on the Wye, Wales' first steampunk weekender. It was fantastic and I will have several posts for you, but as my workmates have heard me banging on about trying to sort my clothes out for it for the past few months, I am under orders to post photos of my outfits!
Now, I'm not a steampunk. I love the books, and science fiction generally, and I love Victorian history, and I'm probably jolly steampunk-friendly but I'm not part of the subculture. (In case you're wondering, I went because some friends of mine organised it and I wanted to support them and thought the event sounded like ripping good fun.) Also, my style tends to be extremely simple and streamlined (probably why the looks of the 20s and 30s appeal to me so much). This meant I didn't have much in my wardrobe to wear, but I didn't have a vast amount to spend either. 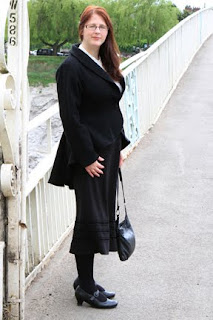 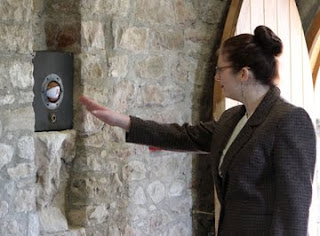 Miss Marple
My other day outfit was this splendid suit. I bought it from Help the Aged back in March for £8, and it's pure wool from Edinburgh Woollen Mill. The fabric is really nice; it's a brown, grey, black and rust check, so will work with black or brown and any shade of metal. Mr Robot calls it my Miss Marple suit. Here it is with that CK Jeans blouse and my ankle boots. The eyeball is The Eyes, and will track you round the room and blink at you. It was Mr Robot's favourite thing in the Contraptions Exhibition, which I will post about tomorrow. 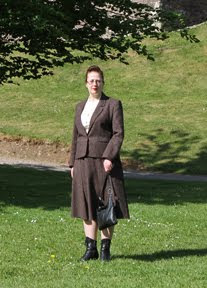 Rachel, one of the organisers, said this suit looked very dieselpunk (the early 20th century equivalent of steampunk; think The Rocketeer, Metropolis and the original 1930s Flash Gordon films and you're there). Someone else asked if it was 'original', so I don't know if she thought it was genuine vintage. My hair spent Friday and Saturday in this gigantobun, wrapped round a mesh sausage from Boots, and it has left me reconsidering whether to cut my hair at all or keep bunning it up.
Bronze Belle

Finally, there's my balldress. My outfits for the event really encapsulate how I shop nowadays, going either for cheap items from charity shops found through pure luck or for items made by small independent companies like The Dark Angel, which are a little more costly than the High Street but which guarantee something distinctive (and sweatshop free). Being a UK size 18, finding nice formalwear is always my bugbear (I had a grouse about finding an outfit for the work Christmas party last November), finding Victorian formalwear was going to be a nightmare and so for the ball I decided to splash out.
Someone in the steampunk group on 'Facebook for knitters' site Ravelry recommended an American firm specialising in Victorian repro, called Recollections. I visited their site, found this little silk beauty on sale and ordered it. It cost around £140.
Labels: clothing events steampunk