The Dolly Dolly Spy and the disappearing author 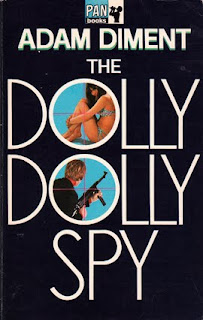 When I bought The Dolly Dolly Spy (you'll never guess where… oh, you know already, Oxfam!) what attracted me was the title. It's a title that tells you exactly when it was written. It's so very 1960s. As the Cold War raged in real life and spies were everywhere in fiction, and while Ian Fleming died in 1964 the James Bond films were still doing bumper business at the box office.


The Dolly Dolly Spy was Adam Diment's first novel; the hero, Philip McAlpine is tall, fair haired, freely admits to being a coward, smokes pot, moves with a 'fast' crowd. He's a pilot, though, and so gets roped in on a mission for the secret service to infiltrate an airline known to run both legitimate flights and ones that will ship anything (or anyone) anywhere you want, no questions asked, if the money's right. The book opens as McAlpine is flying a communist-trained revolutionary into Rhodesia. What his incredibly camp boss really wants is for him to capture a former Nazi – but McAlpine suspects a double-cross and does things his own way.

I found the book simultaneously engaging and frustrating because it was so very much of its era. The story moves quickly. There are an awful lot of descriptions of clothes, just to underline how hip the central character is, and references to cars, contemporary music and interior styles. Those are all good fun. Less fun, from a 21st century perspective, are the attitudes. People of colour are usually referred to using a word you'll only see used on this blog in the context of a gardening tool, and women are valued purely as sex objects. Those things jarred me away from the narrative at times. I'll read the book again as I enjoy it because it is so very much of its era, but those things will always annoy me.

The novel discussed, here's where things get strange. Adam Diment only wrote four novels in total, and it's unclear what became of him after that. In 2008 The National Archives released letters someone had sent to the Bank of England in 1969 accusing Diment of involvement in a currency swindle, but neither Diment nor the other man involved were ever prosecuted so it doesn't look as though the authorities gave the letters any credence. Diment's final book was published in 1971, and after that, nothing. Who knows why Diment stopped writing, or what books he might have produced had he carried on? It just seems bizarre to me that a successful writer would stop writing. The writers I know, published or not, can't stop!

The blog Another Nickel in the Machine has the story in more detail, plus some excellent photos of Diment that will delight anyone who loves the styles of the late 1960s, and it's worth reading the comments as some people aren't convinced Diment ever existed. If he was indeed a publishing house construct, with his name taken from Adam Adamant, it's strange that no-one's ever given a different name to the blonde man in the photos. (And whoever wrote those letters to the Bank of England would've been one deluded individual.) If he was real and simply withdrew from the world's attention, he managed a more masterful vanishing act than one of his own creations might have done. I don't think I want to know the truth, the mystery is too engaging!

(If you love reading about 20th century London, Another Nickel in the Machine is an absolute must-read. It's brilliant.)
Labels: 1960s 1970s books spy