Ute Lemper at the Forum cinema 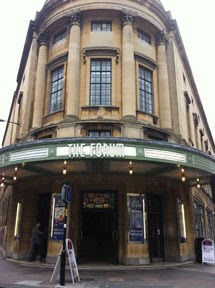 Last night I was lucky enough to see Ute Lemper, one of the greatest singers in the world, performing at one of Bath's few outstanding 20th century buildings, the art deco Forum cinema. (Nowadays the building is used as a church, but the church authorities have maintained the interior and allow it to be used during the International Music Festival. While part of me wishes I could go and seem films there, ultimately I'm just happy the building is so well cared for.)
Ute's show was called 'Last Tango In Berlin' and was a musical journey from 1920s Berlin, with the exodus of artists in the 1930s to Paris and Buenos Aires, then back to Europe for the songs of Jacques Brel, finishing off with the part of the artists that 'still keeps a small suitcase in Berlin'. She was accompanied on her journey by pianist Vana Gierig and bandoneon player Tito Castro. What's a bandoneon? Like a more complicated accordion, much beloved in Argentina.

The show was cleverly constructed, beginning with a couple of songs we all know, 'Falling In Love Again' from The Blue Angel and 'Lili Marlene' (Ute actually sang the original German versions, but I don't know how to spell their titles!) and ending with a medley incorporating 'Mack the Knife' (again, original German version) and 'Life is a Cabaret'. Between them came an hour or so of songs less familiar to me in German, French and Spanish, with a little English. I'm not good enough in any of those languages to follow the lyrics of the songs well, apart from bits like tristesse and yo soy Maria, but it didn't matter. Ute's performance was spellbinding, and her voice so expressive that you understood what she was singing about even if the lyrics were a mystery.
I don't think I've ever head as good a singer in the flesh. Ute could take her voice from a whisper to a bellow, sound like she was going to cry, laugh hysterically or rip the clothes of the nearest chap, and even did a good impersonation of a trumpet! Moreover, she moved incredibly. The programme notes said a ballet had been written for her, and she did have a way of moving her arms that was incredibly graceful and always created a stunning silhouette. I've always thought that if I ever get to see Dita von Teese it will have to be in a large room, and that would be a shame as such artistry belongs in a small, intimate setting. That's how I felt about Ute's performance. I would love to see her in a tiny club, with a little stage that she could dominate utterly, where she could prowl among the tables - yes, okay, the sort of place Jessica works in Who Framed Roger Rabbit. Ute owned the stage last night, and I enjoyed every but of the performance, but it's not her, or the songs', natural environment. 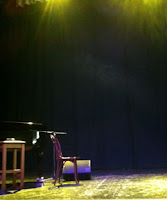 Incidentally, if you like the work of Weill and Brecht, there's still time to get tickets for next Sunday's final concert at the Festival, Mr Brecht, are you now or have you ever been…, a drama about Brecht which includes many of his greatest songs.
(Mr R tried to get a shot of Ute, but his iPhone wasn't really up to the task, so you will have to make do with a photo of her chair!)
Labels: 1920s 1930s Bath events Music