It's ironic, but I've seen more films at the Bath International Music Festival than I ever have at the film festival (which seems to focus on 'worthy' rather than 'fun' – oh how I long for a year when they decide to run a series of classics). Another of Bath's old cinemas, although not as old as the Forum, has become Komedia, a comedy club. Yesterday I went to a silent film event there.
Playing along to silent films is something of a lost art. Nowadays, when you do get them shown, it's usually to a completely written 'new score' rather than someone improvising as the film plays. The first trio of films shown yesterday, Cinderella, The Grasshopper and the Ant and what's left of The Frog Prince, all by animator Lotte Reiniger, were all given new scores. Alexander Balanescu played violin, Evelina Petrova the accordion. She also did some voice work.
I wanted to like it, I really did, but it was obvious from the start that the films were considered secondary in this performance. Balanescu stood right in front of the screen, and just in case that wasn't blocking out enough of the screen he kept his hat on throughout. The music itself reminded me of the stuff that used to accompany the creepy Eastern European animations on Channel 4 in the 1980s, discordant and jarring. Reiniger's animations were exquisite, but it felt as though the duo were using them to illustrate their music rather than creating a sympathetic soundtrack to the films. So I didn't like it, Mr Robot hated it, and I saw at least one chap leaving with his young son.
We downed a beer in the interval. Much needed. 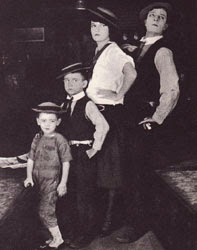 The second half of the show was a complete contrast: two Buster Keaton films, One Week and The Boat, with live piano accompaniment by Huw Warren. In the days of silent film, an accompanist would know all sorts of stock musical phrases and melodies, a little like the way, in oral cultures, repetition of elements is key to storytelling. I won't say Warren is completely fluent as an accompanist - let's face it, he's not doing five shows a day, six days a week - but he did match the action, used familiar melodies to humorous effect (such as playing Brahms' Lullaby as the family went to sleep) and enhanced the films rather than push them into second place. It was great to hear the laughter of children (and Mr R), and was a really enjoyable experience.
I do think the billing showed poor planning on the part of the festival organisers, as one half was very much about avante garde music with film as an almost incidental element, whereas the other was all about the film plus traditional musical accompaniment. There were children in the show, and I don't think the first part of the bill is the sort of thing that makes parents rush back because it was neither immediately likeable or fun. If I do go to see more silents at future festivals, I'll be looking really hard at who's playing…
Labels: 1920s 1940s 1960s Bath events film Music silent