May is Spy Month! 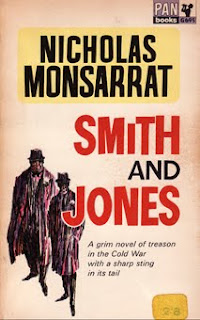 Why is May Spy Month? Because I've just read a vintage spy novel and feel the need to read many more, so it's probably what you're going to get for most of this month. It does mean I'll be covering things a little later in time than I usually do, probably more 1960s and 1970s than anything else, but we can all excuse that for a bit of political skullduggery, yes?

Here's the book that started me off on my espionage binge, another one I got from good old Oxfam, Smith and Jones by Nicholas Monsarrat. It started off extremely well, being narrated by a security service man who's being held responsible for the defection of two agents, who he renames Smith and Jones. Because he's responsible, having vetted them in the past, he's sent off to the cold, grey city where they now live to keep an eye on them.

The book starts brilliantly, being a character study of Smith and Jones, their actions and motivations. Unfortunately the whole novel is designed to be one with a twist in the tale. All the way through there is some ambiguity about where the agents are actually from – it's clearly not Britain as Smith's estranged wife is English and a foreigner, but other than that there are few clues. That's fine, and I actually enjoyed the ambiguity as it made the story less jingoistic. You find a similar lack of flag-waving in John le Carré's novels, where individual motives and actions are so crucial ideology is largely redundant. However, when the end comes it's not really a revelation about character or human nature in the way of a John le Carré novel, it's simply that we find out where Smith and Jones come from, and that leaves the ending feeling a little flat.

Smith and Jones was one of Nicholas Monsarrat's last novels; I'd guess nowadays he's best known for The Ship that Died of Shame and The Cruel Sea because films were made of both.
Labels: 1960s books spy