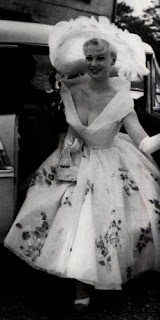 She may not be well-known now, but back in the 1950s she didn't need a surname: she was simply Sabrina. I first came to hear of her listening to The Goon Show, from the exclamation 'By the sweaters of Sabrina!'
Born in 1936 in Cheshire and given the name Norma Ann Sykes, she contracted polio as a teenager. In later years fan magazines would claim it was the swimming she did as part of her therapy that caused her figure to develop – although I've never seen an Olympic swimmer quite the same shape as Sabrina.
If you've ever had trouble finding a dress to fit a small-waisted figure, spare a thought for Sabrina, who at 41.5-19-36 probably had to have everything tailored to fit her!
Aged 16 she posed nude for playing cards, tame by today's standards but something she later said she regretted. She actually had trouble making a breakthrough as a model because photographers found her too voluptuous. However, in 1954, the year she turned 18, she got a small part in Arthur Askey's television series, became Sabrina and the bombshell exploded. By the time the Audrey Hepburn film was released in Britain, it had to be renamed Sabrina Fair to avoid confusing the public.
Over the following years she made a number of films, including Blue Murder at St Trinians (1958) and travelled internationally – she was a massive hit in Australia. She mingled with royalty and met Fidel Castro (who gave her some chickens). But don't take my word for it, the Sabrina Site has everything you've ever wanted to know about the bumper-bosomed bombshell, right down to film clips and her recordings.
Sabrina is still with us, and lives in California.
The picture is from 1957, when Sabrina gatecrashed the Royal Enclosure at Ascot.
Labels: 1950s crumpet forgotten bombshells