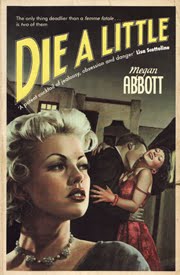 "She didn't even need to show her face or have a voice to demand complete attention." Die A Little

Megan Abbott is an academic who has written about the noir style, so it makes sense for her to write noir novels. Even so, I’ve always had a bit of a love/hate relationship with modern crime stories with vintage settings, so while I read David Roberts, I’d rather discover a new Dorothy L Sayers, and when I read Walter Moseley I wish wholeheartedly for more by Chester Himes. All too often later writers’ political sensibilities carry over. (I know, I know, this is coming from the woman who gets a real bee in her bonnet over the portrayal of so many women and people of colour in vintage films and novels, but too often ‘historical’ crime fiction simply turns out to be modern characters in vintage settings.) That isn’t a problem with these books, happily.

Die A Little, the first of Abbott’s books that I read, didn’t grab me. I felt it was too overblown, emotionally unrealistic, but I have felt that about some vintage films and books too (The Blue Dahlia [film] and Laura [novel] spring to mind). Essentially it’s a tale of repressed 1950s schoolteacher Lora (the narrator) disliking her policeman brother’s new wife, Alice, and doing some digging into a very murky past, only to find herself becoming more like Alice than she likes to admit. Rapidly she sinks into a world of nightclubs, drugs and the shadier side of the film industry. 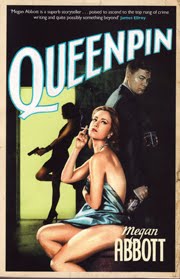 Queenpin is set in a nameless town in the early 1960s, and again is narrated by the protagonist, a young woman who dives eagerly into the murky waters of racketeering when taken under the wing of an ageing ice queen who works for the mob. I liked Queenpin a lot more, possibly because it made more sense for the characters to behave in the way they did; Lora’s descent into ruthless criminality in Die A Little is too much, too fast, for someone who’d previously been upright and law-abiding and shown no real inclination to be anything else, whereas for the nameless hoodlette in Queenpin it is a more natural progression.

I would definitely recommend Queenpin, but I’m still undecided on Die A Little. I do have the urge to go back and read the earlier book to see if I missed something, though, and if you can find a copy cheap, give it a whirl.