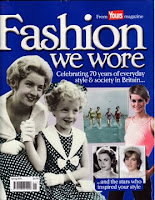 I finally bought the Hotter Comfort Concept ‘Charleston’ shoes that I mentioned a couple of months ago. I'd wanted to get them sooner, but I waited until I’d had a decent freelance payment come in. Remember the pearl-cuffed gloves and fascinator I designed? They paid for the shoes! I’m very pleased with them. They’re extremely comfortable, and I can stride along happily in them. I'm still buying cheap brooches, in keeping with one of my New Year's Resolutions, but they need a post of their own!

Yours, one of the women’s magazines does a regular feature on ‘The Way We Wore’, showing photos their readers send in, and they’ve brought out a publication, Fashion We Wore, made up of those images. (I tried to scan the cover but it's super A4 and I only have an A4 scanner, so it's a bit cropped.) It’s of higher paper quality than a regular magazine, and won’t come out regularly, but it’s not quite a book; in magazineland these strange beasties are known as ‘bookazines’. I bought a copy in Sainsbury's. To be honest, there isn’t enough text for the bookazine to be worth a fiver, and spelling mistakes like ‘broach’ for ‘brooch’ and ‘Dirdle’ for ‘dirndl’ are quite irritating, but it is really good in one important respect: the photos show what ordinary women actually wore. It's reassuring to see that even in the 1940s, not everyone looked like a cross between Rita Hayworth and Lauren Bacall!

Not all the photos have dates, so I had quite good fun playing ‘guess the date’. In many cases I couldn’t make up my mind. People had to make their clothes last, so rarely picked anything too radical in style. The one exception seemed to be the going-away outfits, where lots of ladies had splendid suits. Turquoise appears to have been a popular colour for those.

I found a couple of things really interesting. The readers had voted the 2000s as their favourite style decade (it had one?!), with 60s, 50s and 40s coming second, third and fourth respectively. The 'Ultimate Style Icon' was not Audrey Hepburn, not Grace Kelly, not Jackie O – it was Princess Diana. That really set me wondering; I can remember how popular she was in the 1980s, but I honestly can't recall anyone I ever knew wanting to look like her. Have you ever known anyone who wanted to look like Princess Di? Still, I've never been in fashion, so it doesn't bother me that I'm way out of step here!

The bookazine did confirm one thing I’d already suspected: I need more blouses. There’s no way my home-made woollies will see me through summer unless I plan to spend it in Greenland, so my next lot of freelance will be stuck into a blouse-buying fund – I want to buy at least one decent repro blouse this year.
Labels: clothing magazines