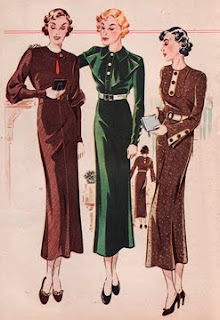 Lots of vintage-loving ladies comment on how the High Street isn’t great for shoppers with a small waist in comparison to their bust and hips. Well, I’d like to come at this from another angle: I’m an ‘apple’, storing my fat on my bust and, in particular, my waist, not on my hips. I know I’m not the only apple in the world. There are probably plenty thinner than me, but still with a larger-than-average waist size for their hips, and the High Street doesn't really cater to us either. (If there is some magical creature out there who can wear everything in the shops, I've yet to meet her. I suspect she's a fashion unicorn.)

Vintageland is, in its way, even worse for apples than the mainstream simply because we’re constantly having ‘the vintage figure’ held up to us in a way that suggests our bodies are somehow ‘wrong’. Well, there were all sorts of ‘ideal’ figures in the past – the flapper wouldn’t have wanted the figure of a sweater girl and vice versa – so I want to look at vintage styles that can look fab on apples. If, like me, you’re a heavyweight apple, I’m not going to tell you they’re going to make you look thin. They won’t, and you shouldn’t have to feel they ought to. They’re simply styles that don’t require as much differentiation between waist, hip and bust sizes as some other fashions.

1920s tubular styles While associated with the very slender, these are actually fab for apples because they bypass the waist altogether. Apples tend to store weight on the bust as well as the waist, so there’s a good chance an apple will have similar measurements for bust and hips, perfect for a straight dress. You may find you will need to go down a dress size or two – I’m a UK 18 because of my waist, but eliminate that and I’m a 14-16.

This style is great for daywear as tunics and calf- to knee-length straight skirts are really practical.

1930s styles An apple may be wider than the 1930s norm (I know I am) but the the ideal 30s silhouette was a gentle wave rather than a dramatic curve. Just l0ok at the picture at the top of this post. You may find the smoothing effect of shapewear useful here, not to make you slimmer but simply to help streamline a rounded tummy, which could otherwise disrupt the line of the figure.

1960s shift dresses As with the 1920s styles, the waist is bypassed, making this another great choice for apples.
These are styles that I think look great on apples, but the gal with the right attitude can make anything look fantastic, so if you're an apple and want to rock a curvier look, such as a 1950s one go for it! Confidence is the best accessory you can have.
Labels: 1920s 1930s 1960s clothing