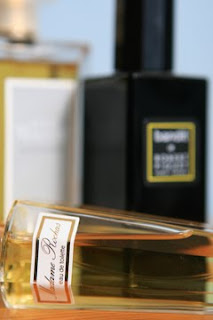 Here we are, at the final part of my formulated-then-sold-now perfume roundup. A word of warning on these ones: if you were in your teens/twenties during the period covered here, do think carefully before wearing one of the scents from that time too often. You won't have a signature scent, you'll be giving yourself a date stamp.

As always, photos are copyright to PP Gettins (aka Mr Robot).

Clinique Aromatics Elixir (1971)
Very herbal, but also chic. Can be worn to work without being inappropriate, but also ideal with a little black dress.

Eau de Patou (1976)
Recently rereleased as part of Patou's Heritage Collection, though I've yet to see a comparison of the latest version with the original.

Yves Saint Laurent Opium (1977)
Has been reformulated, and by all accounts in a fashion displeasing to Opium addicts, so if you like it hunt down some older bottles now. I haven't seen any older bottles with discounters for a while, so Etsy or eBay would be your best bet.

Estee Lauder Cinnabar (1978)
In any battle between this and its near cousin Youth Dew, Youth Dew wins. Cinnabar is, however, lovely in itself.

Balmain Ivoire (1979)
I quite like this: it’s green and soapy and clean-smelling. Apparently it was inspired by a beautiful woman in an ivory satin evening gown, but for me it’s one for very hot days or times when smartness is essential because it is so clean.

Giorgio Beverly Hills Giorgio
Tuberose and orange blossom hell. Was actually banned from some restaurants in the 1980s. Personally, I loathe it: it’s loud, it’s vulgar, and it carries for metres in every direction. On the plus side – if it is a plus – you can get it dead cheap in Superdrug or Asda. (I should say at this point that most of the perfumes on my ‘Don’t come near me wearing that!’ list are 1980s tuberose and orange blossom. I find they’re usually far too strong, and they cling to my throat so I can taste them. Giorgio is by far the worst.)

Yves Saint Laurent Paris (1983)
I like this rose and violet blend - very pretty. People do say it’s been altered a lot since the 1980s.


Christian Dior Poison (1985)
Another 1980s tuberose and orange blossom powerhouse like Giorgio, but not as obnoxious. Okay, I’m being unfair, this is quite possibly the scent of the decade, and would be the perfect finishing touch to an 80s look. Just dab, don’t spray, and let me stand upwind of you, mmkay? 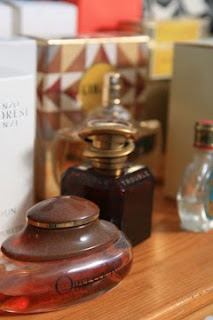 Calvin Klein Obsession (1985)
I still have a bottle of this from the late 1980s. In some ways it’s typical of the era in that it’s both strong and sweet, but it’s not as throat-clingy as many others.

Cacharel Loulou (1987)
More tuberose and orange blossom. You know my thoughts on this sort of scent.
Estee Lauder Knowing (1988)