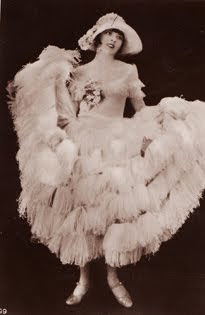 “I was the spark that lit up Flaming Youth and Colleen Moore was the torch.”

So said F Scott Fitzgerald. Strange, then, that the girl who helped shape the look of a generation should be forgotten today. This photo is a postcard from my collection; when I bought it the chap who sold it to me told me most people picked it up thinking it was Louise Brooks, then put it down when they realised she wasn’t.

Why is Colleen one of my style icons? Back in the late teens and very early 20s, the flapper as we know her didn’t really exist. The term ‘flapper’ existed, the waistlines of dresses were dropping, and bob haircuts had started creeping in during the late teens, but weren’t especially common, but there wasn’t really a definining image of the flapper.

In 1920, curvy, long-haired Olive Thomas made a film called The Flapper. Sadly, Olive died later that year, probably a suicide. Had she lived, she probably would have been the first choice to play the lead in the 1923 film Flaming Youth. As it was, slender Colleen Moore got the role, chopping her hair off to convince the studio she was right for the part, and that film got girls reaching for the scissors all over the US. She may not have bobbed hers first, and I do think there were other actresses who wore theirs better (no-one will ever approach the perfection of Louise Brooks, in my opinion), but Colleen turned the bob from a curiosity to a craze. For that reason she ought to be better remembered as a style icon.

There is one little thing Colleen did that I won’t thank her for, but should probably be acknowledged: as far as I’ve been able to ascertain, she was the first celebrity to put her name to a perfume. ‘Colleen Moore’ perfume and cosmetics usually came in packaging adorned with shamrocks as she had Irish ancestry. Here’s hoping it smelled better than some of the dubious brews current celebs have a hand in.

Colleen continued to play flapper roles for several years (I would argue vigorously with the Wikipedia entry for Colleen Moore that suggests Moore’s flapper career was over by 1924 - the filmography is incomplete and misses out titles such as Synthetic Sin, Painted People and Why Be Good, plus she was voted the biggest box-office draw in the USA in 1926, above the likes of Charlie Chaplin and Mary Pickford, hardly an actress whose career was over. I fear an overzealous fan of another actress had a hand in the entry about her...). Eventually she retired without losing all her money in the Wall Street Crash, and living to a ripe old age. Her story is a happier one than many a star’s, and that’s probably one of the reasons why she’s been forgotten.

Colleen is a style icon for me personally because she may not have been a great beauty, nor was she an outstanding actress, but like Bernice in the F Scott Fitzgerald short story Bernice Bobs Her Hair she showed that all a girl really needs is a nifty hairdo and a bit of spirit… Got scissors?

I had a little site devoted to Colleen back in the early noughties. I’m no longer with Blueyonder but the site remains. It’s a little out of date now, but you can find it here. The best thing is, the lost film list is out of date in a very good way! Her Wild Oat has been shown at film festivals in the US in recent years. The best online collection of photos of Colleen is at SilentLadies.com.