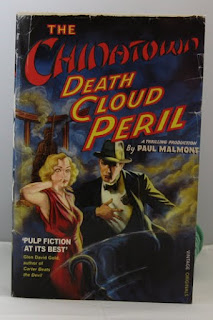 The Chinatown Death Cloud Peril is one of the books that puts the 'robot' in the 'crinoline'. I love alternate histories, tales of 'might have been' and suchlike. Author Paul Malmont is clearly a massive fan of the 1930s pulps. In it, two pulp authors, Lester Dent (creator of Doc Savage) and Walter Gibson (creator of The Shadow) relate to a young, less successful writer, L Ron Hubbard, the story of Chinatown's Sweet Flower wars. Meanwhile, in Providence the least successful writer of all, Howard Lovecraft, is dying after a trip to a mysterious island… not that a little thing like death can stop HP. (These aren't the only writers who pop up as characters, but I won't spoil things by naming the others. Spot them for yourself!)

The chapters relating the writers' adventures are interspersed with the story of a Chinese warrior, and as Gibson and Hubbard look into Lovecraft's demise and Dent tries to find out the real ending of Sweet Flower's story and the Dragon crosses the ocean, the tales meet in a wonderful climax in New York's Chinatown.

One problem with the pulps for modern readers is their attitude towards people of colour. I'm not Chinese-American, or of any Chinese ancestry, but I do feel that Malmont, while creating a work of pulp with all the exaggeration that requires, has also tried to create rounded Chinese characters. (If you have read this book and feel otherwise, please do say so in the comments because I'm well aware that there are things I might not be spotting.) The one character who is unreservedly 'bad' in the old pulp mould is an American soldier, and he features very rarely.

This is a great book, and if you're looking for a Depression-era adventure with plenty of pulpy action, I recommend it unreservedly. I adore films of pulps - yes, definitely Doc Savage: Man of Bronze and even The Shadow - and really wish this one could make it to the silver screen,
Labels: 1930s alternate history books pulp