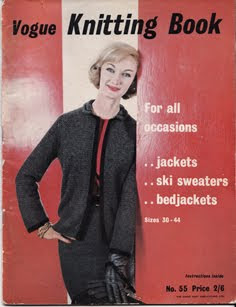 This week the gods of vintage have smiled on me, oh yes!
It started off normally enough, with a book: The Tiger in the Smoke by Margery Allingham. It's a crime novel, with Albert Campion looking into why someone might be impersonating his widowed cousin's husband, who was a casualty of war. I really enjoyed it, if only for its non-saccharine portrayal of post-war London, including a ragged gang of beggars left homeless and, in some cases, disabled from the war, and with a heavy fog over the city. The story is fairly predictable, and the villain's name made me laugh because someone with the same name was later a very famous musician so I couldn't help but picture him in the story. However, it's got a cast far from your usual crime novel and was much more enjoyable for that.
That looked like it on the vintage front, but on Friday I went to the Knitting and Stitching Show at Alexandra Palace. On the train up I cast on Such Flattering Puffed Sleeves. I dropped by the Arbour House stand hoping to see lots of the goodies from A Stitch In Time 2. There weren't as many of those as I'd hoped for but all the items from the first volume were there, and it was great to feel them 'in the knit'. (I would love to know what moisturiser Susan uses, every time I see her I swear her skin glows! I was horribly sweaty, which is what happens when a lardy lass forgoes the courtesy bus and walks up the hill to AP, and that was quite embarrassing. Oh well. I'm sure I can't have been the only clammy monster after that hike.)
There was a stall there selling vintage knitting and sewing books, which is where I picked up the little 1959 volume pictured at the top of this post. It cost £9, which is rather more than I paid for the other volume of Vogue Knitting Book I own, but as I wasn't buying yarn I thought I'd treat myself. Then I spotted a 1930s embroidery/needlework book. I have one (shown here) and this was another from the same family, but with more homewares. £15. It's a good job I was working a stand, because that meant I had time to sit down and flick through it - and lots of pages had big holes where pictures had been cut out! Had it been one cut-out I'd have lived with it, but there were at least a dozen ruined pages. Back I went and got my money back. 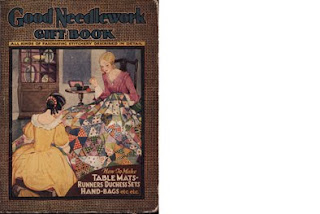 However, one of the knitwear designers I work with dropped by the stand, and saw me gleefully waving my knitting pattern book about. She asked me if I liked old knitting and needlework books. "Oh yes, I've got them on my Christmas list."
And she said…
Wait for it…
I still can't believe it myself…
"I have an enormous pile under my desk at home and I don't use them? Would you like them? I can bring them in but there are rather a lot; you'll need a car to get them home."
I won't quite believe I'm getting them until I've got them, but this makes me so, so happy. I offered to pay but she doesn't want money so she's getting a gigantic box of Lindt chocolates whether she wants one or not! I often give away stuff to people I know will treasure it, I can't be bothered with eBay and would rather see things go to a genuinely loving home, and she must feel the same way about these patterns. Still, the gods of vintage have smiled on me!
Labels: 1930s 1950s books knitting robot data vintage week