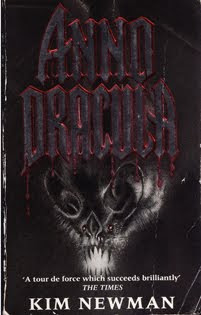 This is one of my three favourite books of all time, and a fitting alternate history to write about in Halloween week. (My other favourite books are Tinker, Tailor, Soldier, Spy by John le Carré and The Great Gatsby by F Scott Fitzgerald.)

To give you an idea of why I love this book so much, I’ll relate the opening. Jack the Ripper is recounting, to his phonograph, the killing of his latest victim, a pretty foreign prostitute with her hair in a shiny black bob. Wham! In that one opening scene you have Jack Seward, the doctor from Dracula, as Jack the Ripper, in the final scene from Pandora’s Box starring Louise Brooks. Fictions and fact all colliding in one scene.

The book’s premise is simple: instead of driving Dracula away when they caught him with Mina Harker, the vampire hunters wavered and Dracula escaped, killing Van Helsing in the process. He seduced, made young and married the grieving old Queen, and as the book opens London is a city where the undead are commonplace. Lord Ruthven is Prime Minister, vampirism is becoming extremely fashionable and in the East End someone is murdering undead prostitutes. The Diogenes Club, under the leadership of Mycroft Holmes, send in their agent Charles Beauregard, who teams up with vampire Genevieve Dieudonne to uncover the murderer (two of the few characters who are completely original to the book).

If you have any affection for Victoriana and vampire stories, even if you hate this novel you will adore going through it and picking out the allusions. I was especially pleased to note Raffles teaming up with Moriarty, and the word ‘Basingstoke’ always makes me smile now, but every page contains something to please and it gives the story an incredible richness. It’s like getting all one’s favourite things in one wonderful package.

The book you see here is my own, bought in 1992 and very battered. It's been signed by Mr Newman - usually I'm not prone to 'fannishness', but in the case I had to get the book signed.
Labels: 1890s alternate history books horror