Partners in Crime has finished, and the second three-episode story, N or M, served up as much costumey goodness as the first. (If you'd like to see my costume writeup, it's here: The Secret Adversary.) Walliams and Raine have won me over. I do like this programme. It's fluff, and it's not faithful to the original books, but it's entertaining and feels done with genuine love of the source material even as it deviates from it. Agatha Christie didn't write masses of novels about Tommy and Tuppence Beresford, and I do hope that when they've run out of books to adapt, the programme makers carry on.

Mild spoilers ahead - I won't reveal whodunnit or whohaditduntoem, but I will tell you a little of what the Beresfords do in this story.


Still reading? Without giving too much away, then, Tommy and Tuppence go undercover, independently, at a bed and breakfast on the Norfolk coast. The inhabitants are a mixed bunch.
I though Carl's bad-boy look was spot-on for the 1950s, all denim and a white T-shirt. Very James Dean. He might as well be wearing a badge saying 'suspicious character', though. When Carter comes to see Tommy and Tuppence, I have to say the casual look doesn't suit him at all. He looks like a tortoise in that getup - if anyone ever decides to make Christopher Fowler's crime novels for television, it looks like we've found Arthur Bryant. Leave it to Major Khan to dish up the dapper, especially in uniform at a military ball.

The differences between the female inhabitants are subtle, but still there. Mrs Minton and Sheila Perenna (the landlady) both have a bohemian look, but while Minton is arty almost in a Bloomsbury way, Perenna's style looks forward to the 1960s. Change that tartan of her cape for Welsh tapestry and that cape would be jolly 1960s indeed.
Mrs Sprot, meanwhile, is clearly the house femme fatale. Her clothes are more tailored, her jewellery more expensive looking, and her hair is flawless. 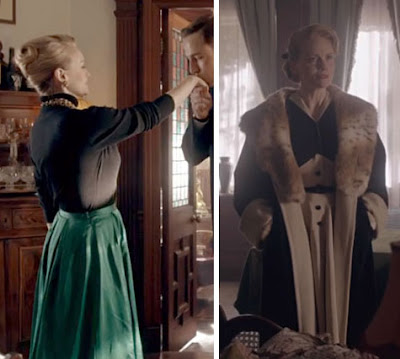 This theme carries on at the ball; Mrs Minton has gold embroidery, Mrs Sprot is rocking a full-on ballgown with slinky elbow-length gloves, and Sheila Perenna's dress looks like it's made out of fabrics brought back along the hippie trail. 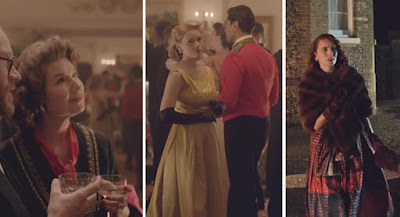 Poor old Tommy seems to have no special getups for this story. Even though he and Tuppence are undercover, he dresses exactly the same in disguise as he does at home. At the start of the story he and Tuppence go to the opera, and when he goes to the ball he wears the same dinner suit. His suits are lightish in colour - if colour is the right word, as they're all very neutral. That's probably a clever move on the part of the programme makers; David Walliams is known for a certain flamboyance, so keeping his costumes simple helps refocus attention on the character of Tommy rather than Walliams the actor.
Jessica Raine, on the other hand, must have sold her soul to the costume department because she seems to have as many outfits as all the other characters put together. At home, her Tuppence-wear is very Tuppence: neat little knits and pencil skirts. (That lovely embroidered blouse from the first story made a comeback too.) I have noticed that she often wears layered knits, but never an actual twin set. It gives a classic 1950s knitted top and cardi combo a more modern look. 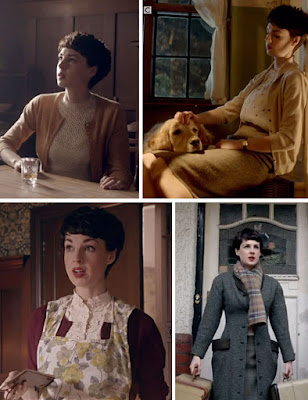 I gasped when I saw her opera dress, though I'm afraid I couldn't get a good full-length screencap. It's ballerina length, and the beading lessens as it moves down the bodice and on to the skirt. 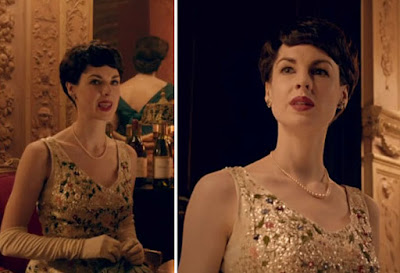 When she goes undercover, Tuppence becomes a much more glamorous creature. I like her everyday clothing, but she really pulls out all the stops when she's trying to winkle out secrets. That little lacy blouse and full skirt are a far cry from her pencil skirts and nonfraternal twin sets. Even her hair gets bigger, which is Mr Robot's number one sign of 'Girl who's been bitten by a vampire in a cheesy movie'.

That said, Tuppence packed her bags at home and flounced out - I find it hard to believe she had these little numbers just sitting round at home. Especially her ball dress and long leopard coat. And that dress, by the way, is TOO SHORT. I know people nowadays would wear ballerina-length dresses to a formal event, but I can remember even back in the 1980s if a woman turned up at a military ball in anything other than floor-length all the way round, there would be WORDS. As someone my mum knew discovered. Lovely as it is, there's no way Tuppence would have got away with that in 1952. 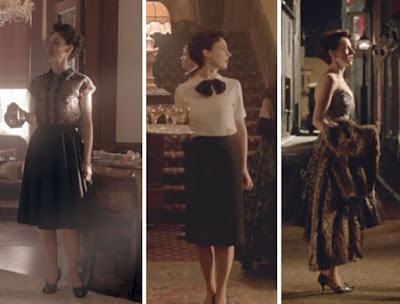 Ah Mim, you're too picky. Look at that red suit. LOOK AT IT. The leopard print at the neckline, and matching leopard cuffs on the boots, are wonderful. Some people might say the matching coat is a step too far, but if you're going to go for scarlet and leopard, you might as well do it properly. 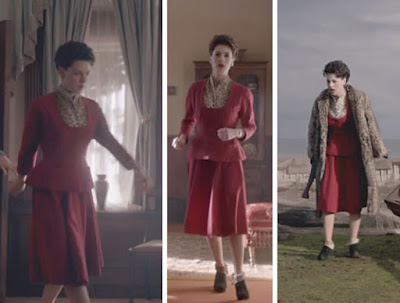 Anyway, like the bitten girl, once the forces of evil are defeated and she's in the arms of her true love, Tuppence returns to her nice-lass ways, complete with one of her bizarre hats. I do hope we see her and Tommy on screen again next year. 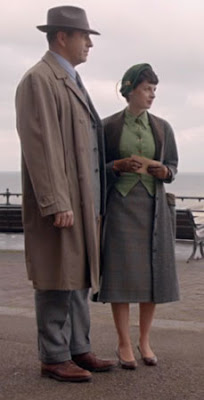