Professor Moriarty: The Hound of the D'Urbervilles, Kim Newman [books] 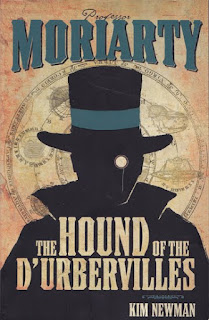 The whole world seems to be Sherlock Holmes-mad right now - the bits of it I interact with, at any rate. I have to say, the Moriarty in the current telly programme is not my idea of a supervillain. Not icy enough. Too giggly.

In Professor Moriarty: Hound of the D’Urbervilles Kim Newman places the criminal genius centre stage. The book is allegedly the memoirs of Colonel Moran, the villain who brought Sherlock Holmes back from the presumed dead in Conan Doyle’s story 'The Adventure of the Empty House'. He relates a number of cases from his and Moriarty’s time together. Newman makes Moran the equivalent of Watson, right-hand man to a greater mind. (Newman traces the reasoning behind linking the two scoundrels in his Notes and Acknowledgements.) The pair's landlady, Mrs Halifax, runs a high-class brothel, the opposite of Mrs Hudson's respectability.

Moran has something of George MacDonald’s Flashman to him (again, Newman himself comments on this in the acknowledgements), but also the breezy risk-taking aspect of Newman’s own Richard Jeperson, ‘The Man from the Diogenes Club’. Moran is a a card cheat, a womaniser, a scoundrel, but also a hunter and thrill-addict.

The cases are brilliantly twisted reflections of the Holmes stories. The great detective is rarely mentioned and never actually seen. In ‘The Hound of the D’Urbervilles’, for example, Moriarty and Moran discuss the possible owner of a walking stick, then take on that man’s commission to kill a ghost, that of a red dog that haunts the D’Urbervilles... as has the ghost of Tess Durbeyfield, hanged decades earlier for the murder of one of the family. Newman makes wonderful parallels with the key elements in 'The Hound of the Baskervilles' – and if you know Thomas Hardy’s Tess of the D’Urbervilles, you’ll find it even more fun.

My favourite of the cases is ‘The Red Planet League’, if only because of the passage when Moran parodies the famous opening lines from HG Wells’ The War of the Worlds. "No one would have believed, in the next-to-last years of the nineteenth century, that his lecture was being watched keenly and closely by an intelligence far greater than his own; that as he blathered on and on he was being scrutinised and studied, perhaps almost as narrowly as a berk with a microscope might scrutinise the tiny wriggly bugs that swarm and multiply in a drop of water." It made me laugh when I read it. It still makes me grin to think about it. It exemplifies what I love about Newman’s books. I’ve been reading them for decades, and there’s a wonderful sense of revelry in all of them. You can tell he adores the characters and books he plays with, weaving into his own narratives. He respects the original sources, and knows them thoroughly. The Great Game is not Mycroft’s game at all. The Great Game is the one Newman plays with popular culture... and everyone’s a winner.

I have also reviewed Anno Dracula and The Bloody Red Baron by Kim Newman.