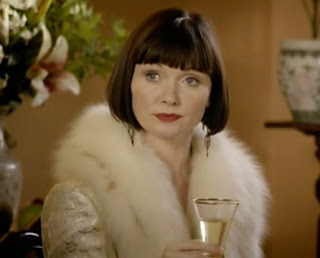 Waaaay back in January I blogged that the creators of the Miss Fisher’s Murder Mysteries TV series were hoping to bring Phryne to the big screen – well, it’s a step closer, as the production company has launched a Kickstarter to support Miss Fisher and the Crypt of Tears. (Nice title!)

Kickstarters are funny things. In case you’ve never come across them, people with ideas to make things but insufficient funds put up an appeal for backers. The more you pay in, the more perks you get – it could be a free copy of the book/comic/album, a free garment, your name in the credits, anything up to a walk-on part on a film. I put money into them from time to time, often simply because I believe people should have dreams, and it’s nice to help them achieve them. So I usually pay in at a lower tier, not expecting anything back. The problems seem to come when people pay into one at a higher tier, expecting something to definitely be produced and to receive A Thing in consequence, and then for whatever reason said Thing takes longer to make, or never gets made at all.

Of course, it’s pretty rare that nothing gets made. Sometimes things are delayed or not quite as expected – I’ve seen it happen with videogames – but usually they’re delivered. One time I backed a 1980s-inspired horror comic at a level that would entitle me to a free print copy, and it got delayed so long I forgot about it and got a very scary surprise in the post! If you’re especially risk-averse, you probably only want to back things with a proven track record – perfume company 4160 Tuesdays has done successful ones, as has lingerie firm Kiss Me Deadly. The Chap is currently raising funds to start its own accessory and clothing line, and I’d be very surprised if those things didn’t get made.

Now, the Miss Fisher Kickstarter won’t fund the whole film. As the Kickstarter makes clear, this will help get the filmmakers across a funding gap and prove there is an appetite for a Phryne film. So it’s not a guarantee that the film will be made, but it does make it a lot more likely to be produced. Here’s hoping we do eventually see Miss Fisher on the big screen.
Labels: 1920s film television