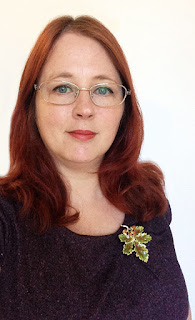 I am so glad to see autumn. I'm not a massive fan of longer nights, or of plants dying back, and definitely not of cold or rain, but I am very pleased to be able to get my lovely woollies out of the wardrobe again, both knitted and woven. I pulled my favourite old purple tweed dress out today and felt so happy to be wearing it again. (The poor thing is very well worn, and while it doesn't show its age too badly on the outside, the lining is completely trashed.) I always feel smart in this dress. Tweed is a very forgiving fabric; it doesn't show every lump and bump, and it's jolly comfy too.

The down side of autumn is that I really need to get my act together and sew that [blorp!]ing sleeve on the 1930s jumper I finished knitting last year, because it's not going to sew up itself.

The brooch, incidentally, is a cold enamel one by British manufacturer Exquisite. They did loads of this sort of thing in the 1950s and 1960s, including a leaf range like this one, and a series of birthday flowers. You can still find them, but often they're a bit battered. This one had some chips when I bought it, but I fixed them. Can you believe one of the acorns had no paint on the end? Managed a good match there. (Here's my post on How to repair vintage enamel jewellery - note that it only covers the painted 'cold enamel' type, not the high-end fired glass type. That's a specialist job, I'm afraid.) 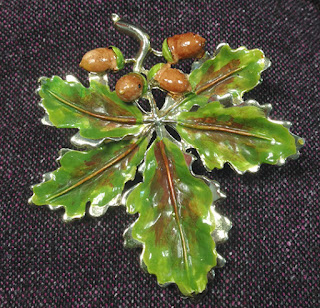 Despite being pleased that autumn has arrived, I did do a bit of shopping in the Boden sale. YES I know it's mumsy, but I'm 43, I'm allowed to be mumsy. NO it's not vintage or even repro, but the fact that my vintage doesn't fit and repro seems to be all about the waist - even styles that are supposed to be 60s - was really getting to me, so I took the modern route. (You have no idea how many posts I've done on feeling awful about my apple-type body, but no-one needs to read that nonsense, so I always delete them as soon as they're written. I've been proactive instead and followed more blogs by older/plus sized bloggers for inspiration.) Anyway, I wanted something for my holiday, and picked up a couple of skirts and a top. I shall show you them later in the month, in the lovely (hopefully!) setting of Madrid and Zaragoza. There's a lot of navy and red in the prints, so they'll go brilliantly with the charity shop bits I bought a week or so ago and the navy handbag Goody sent me.

Ziggy is still in the vet, but he's getting better every day. Thank goodness for pet insurance! He's racked up a four-figure bill so far, and I'm expecting we'll be able to bring him home next Monday.  He seems to have licked or bitten something that's caused his whole tongue and mouth to swell up, so he's been on a drip to pump liquids and antibiotics into him, and also has a feed tube in his neck. Poor little chap. We took him a grubby pillowcase so he'd have something that smelled of home, and yesterday we got a purr out of him, which was nice. Because we both work full time, I don't want to bring him home with the tube still in his neck, in case he or Pippin do something to it, so he can't leave the vet till he's eating and drinking by himself. He's been slurping up high-calorie mush, which is a good sign.

I hope you're all set for a lovely autumnal weekend. Mr Robot and I are off to see Professor Elemental tonight (assuming Ziggy isn't well enough to leave the vet - if he comes home tonight, we'll stay in with him) so I'll actually have something interesting to tell you tomorrow.
Labels: accessories clothing shopping