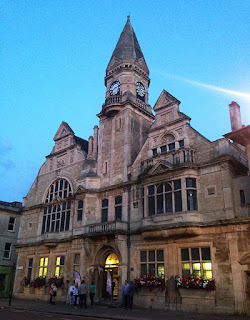 On Friday night, Professor Elemental actually did a gig in Trowbridge!

Why the excitement? Well, Trowbridge isn't a place where lots happens. I like living here, but despite being the county town of Wiltshire, it often gets overlooked, I always feel because it's very working class. When the council gave up the old Victorian Town Hall there was a fear it'd be turned into flats, but it's become an arts centre for the people. I actually make monthly donations to Town Hall Arts; I feel very strongly that the arts should be for everyone, not just the privileged, and not just people of school age. (My monthly donation is a tenner; it might just keep the place in loo roll, but every little helps.) The Town Hall hosts tea dances and free art exhibitions, theatrical performances and much more. It really does do stuff for most sections of the community. Sheer Music is a Wiltshire music promoter doing more in Trowbridge, and they brought the Prof to town. A venue I support hosting an artist I admire? That was Friday night sorted.


I hadn't expected a support act, but local 'agricultural hip-hop' artist Corky was on first. He had a tough job in one way; a gentleman and his friends came along to celebrate his 40th birthday, which meant a good chunk of the audience were distracted during Corky's set, but he held the stage. He kicked off with his 'unofficial anthem of the West Country Nation', Ginster's Paradise, and carried on in good form from there. 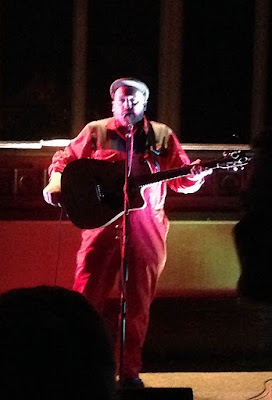 It's easy for an act playing on regional stereotypes to pander to them, especially when those stereotypes are that country folk are thick, but there was a real wit and strong political undertone to Corky's songs – a real awareness of rural poverty and pressures. That said, the one that had Mr Robot in fits of giggles was Corky's cover of Goldie Lookin' Chain's 'Your Missus Is A Nutter'.

After an interval, and cider, the Prof took the stage. Before the gig, Mr Robot had worried that the venue would be too small, or the crowd not what he was used to. However, Corky had got everyone's spirits up beautifully, and Professor Elemental bounced up and on to what used to be the Magistrate's bench. Most of the songs were off his recent album Professor Elemental and his Amazing Friends, so were new to Mr Robot. That said, I think they were new to a lot of the audience. Whereas in the past I've seen Professor Elemental at Steampunk events, on Friday the number of people dressed steampunk numbered in the single digits (I don't know how many might have been steampunk-adjacent, like myself). This was more of an arts centre crowd, and it was great to hear the Prof talking about the importance of arts, and creativity, which is as I've mentioned something I believe in. He even got one member of the audience rapping at one point, and you could see the lad felt a little out of his depth, but Professor Elemental encouraged him, and we all gave him a massive round of applause at the end. 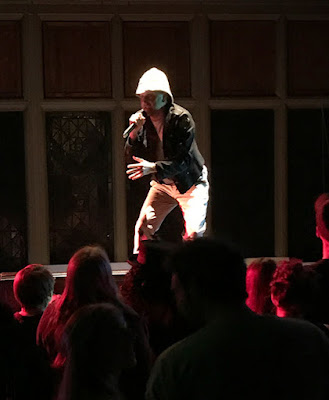 This felt like a very different gig from Professor Elemental than the ones I've been to in the past, perhaps because he didn't have so much weight of audience expectation, and had a small crowd who were loving every moment. It felt really joyous.

All in all, it was a fantastic night. I look forward to seeing what other acts Sheer Music bring to Trowbridge, and to going to the Town Hall more.
Labels: events Music steampunk wiltshire