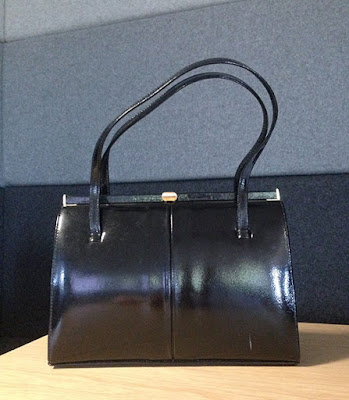 As someone who tries to look after things, I find it really frustrating when I wear something out, and for some reason I seem to burn through black 1960s bags. The vinyl handle cracked on my first one (I’ve still got the back but haven’t yet got round to repairing it), and the cardboard stiffening the second literally gave way, so that handle didn’t just come loose, it tore out a chunk of the structure. Happily, I’ve started seeing the sorts of bags I like creeping back into charity shops. I do have two black ’60s bags, but one has a lace front and the other is snakeskin, and both are really a little too evening-y for work. As soon as I saw this one over the weekend, I pounced. It was a tenner in my local hospice chazza.

I’m really not sure about the date of this one. Style-wise, it’s right in keeping with my 1960s handbags, but the original owner had clearly valued it as it still had its original swing tag inside, and that was made of moulded, embossed plastic. That tag screamed ‘1980s’ to me. I did find in Google Books the 1968 edition of Leathergoods, a leather trade industry magazine, a reference to Adrian Gold, so the firm was clearly active in the late 1960s (“The newest silhouette in Britain is the boxy bag, and Adrian Gold hope to have these in the shops by Easter to retail at the six-guinea level”) though most other online references to the company seem to be from the 1980s.

Perhaps the brand was popular with older ladies who had less on-trend tastes in bags – let’s face it, possibly the most famous handbag carrier of the 1980s was Margaret Thatcher, and hers were definitely not the fashionable sort. It’s perfectly possible for this to be a later bag in a very 1960s style. I don’t actually mind what the real date is; it’s the style that’s the important thing to me. And the fact that this one is leather, whereas the two I wore out were both vinyl. With luck, that means I won’t need to go hunting for another work bag any time soon.

Oh, and if you want a Ziggy update: his 'burns' are pretty much healed, we're just waiting for his fur to grow back, and he's eating a normal amount again, though he does go a bit dribbly for about 15-30 minutes after eating, so he's clearly got a slightly sore mouth still. And we haven't let either cat out since he came home, which is really annoying both of them! But I reckon he'll be fine.
Labels: 1960s 1980s accessories charity shopping