Three come along at once... 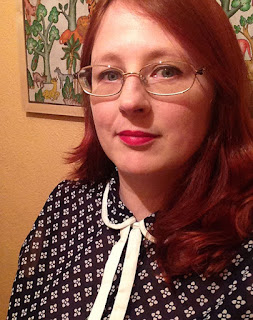 I have been properly ill this week. I spent pretty much all Saturday asleep with what felt like a nasty virus - feeling doubly awful as I was supposed to be going to Norwich for my brother's 40th birthday party that day - and then on Sunday it mutated into stomach trouble, about which I shall say no more. That knocked me out of action for a couple more days, but I had to be back at work on Tuesday as GamesMaster was on deadline. I am dedicated to getting my publications to press!

I managed to pass the lurgy on to poor Mr Robot. We usually meet most days for lunch, which is a bit sad I guess, but I'm happy that my husband is also my best friend. As he wasn't available, yesterday I thought I'd poke round the shops. Laura Ashley had a sale on, so I tried on a couple of dresses there, one tartan in a very 60s shape, and one shirt dress in one of their 70s prints. Neither looked right. My boobs looked awful in the former (a more 60s-style bra, like a Doreen, might've helped, but I wasn't willing to spend £60 without knowing for sure) and the other showed up my lack of waist horribly. It had a drawstring, and I had no nice curvy waist to draw it into, so it just sat forlornly on my belly. Feeling bad about my shape, I went for a whizz round the chazzas, and got a couple of nice tops that actually looked good on my blocky body for not much money at all. One was a sleeveless linen-look one, somewhere between navy and royal blue in colour, and the other was this navy print sleeveless blouse, which is modern but has a 60s vibe. Hooray for charity shops. Though I really do need to break my addiction to navy at some point. 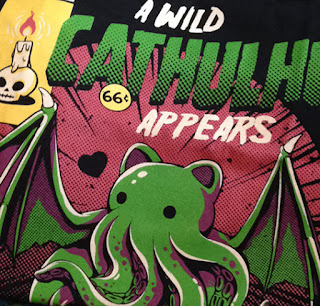 When I got home, a T-shirt I'd ordered from Qwertee had also arrived. I don't wear T-shirts during the daytime, but I do now for the gym, and years of not wearing T-shirts means I don't have many, so I fancied getting some interesting ones. I also tend to 'bloke up' for photos to be used in my magazines, wearing things like trousers or jeans and T-shirt or tartan shirt. I've never butted up against much sexism in my job, I've been very lucky, but I also prefer readers to see me as one of the gang rather than especially feminine. No space cat dresses for them. But they do get this Cathulhu T-shirt.

Returning to the subject of charity shops, I think that as 'vintage' as a mainstream trend is fading, we might be seeing more vintage in regular charity shops and the end of the 'vintage' charity shop. One in Bath has switched to be a bookshop, and I'm finding more Old Tat in the regular ones. Living out in the sticks I don't often get to go to the dedicated ones in the big cities, and would much rather hunt for treasures in my local ones. (That said, following Curtise on Instagram makes me long for a visit to the one she works at, as her stock is amazing.) Have you noticed more proper old stuff in the ones near you again, or any 'vintage' ones closing? A new chazza opened in my home town this week. Now he's on his feet again, my husband's going to find himself going on an extended charity shop crawl on Saturday, I fear. The chazza gods seem to be sending stuff my way, and it would be rude not to make the most of that.