The steam fair's in town 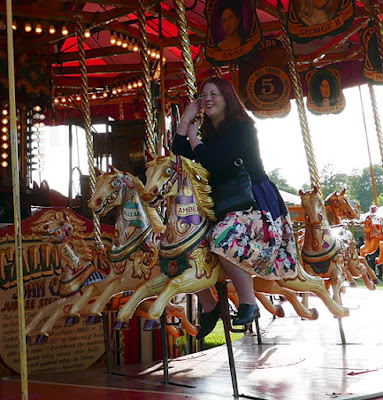 Carter's Steam Fair is back at Victoria Park in Bath, so Mr Robot and I popped along after work this evening. I missed it last year because I was poorly, so it was lovely to go along again. The weather has been awful since the fair opened on Saturday, but tonight it was sunny. I was really excited to be revisiting the fair, so wore my very silly space cats dress, which someone at work described approvingly as 'f***ing bonkers'.

Here I am riding on the Gallopers. According to Carter's, there's a difference between British Gallopers and American Carousels. Gallopers turn clockwise, not anticlockwise, and carousel horses are prancing. To be honest, I'd never known there was a difference, but anyone can see Carter's Gallopers are a work of art, from the portraits of kings and queens above the horses, or music hall artistes round the centre of the ride, or the wonderfully decorated organ. I always go on this ride because it's so beautiful. You can see the steam engine that powers it glowing away in the centre.

The big attraction for me this year was the 1960s Ghost Train.

I'd never been on it before (I first saw it last year as my morning walk took me past the fair site). It's a traditional 'sit in a little cart and be taken past illuminated monsters' ride, so is probably exactly what you'd expect, but it's fun nonetheless, and it lasted longer than you'd expect from the small size of the ride. The monsters were ace; they had a proper 30s-50s B-movie look. I wasn't scared so much as delighted. 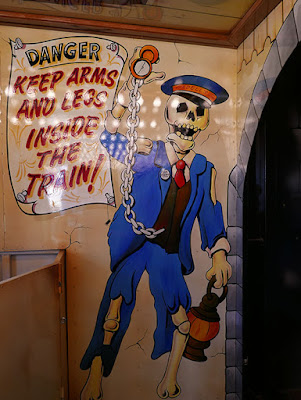 There were a few changes from past years. There was no helter-skelter this year, which was a shame as it's such a big, dramatic structure. Its height and solidity really adds something to the landscape of the fair. I was also sad to see the cars on the rock 'n' roll dodgems had been changed. Carter's had to do this because the old cars, which had the names of famous rock 'n' rollers on, were too worn out to keep running, but the new ones are fairly plain and it's not as much fun bumping into a car with a number on as it is ramming Jerry Lee Lewis or chasing down Elvis. I hope they make the new cars look more interesting over the winter, which is when the rides all get overhauled.

However, other classic rides were there, including the 1920s Steam Yachts, the 1960s Lightning Skid, and the 1940s Victory Dive Bomber, which is without a doubt one of the most terrifying rides I've ever been on. While the arcade wasn't there - so no What The Butler Saw machines for Mr Robot to ogle - the Mirror Show (a classic hall of mirrors) was new to me. A fair should change, really, it should never be what you expected. Delightful, but always a little surprising. And Carter's is that. 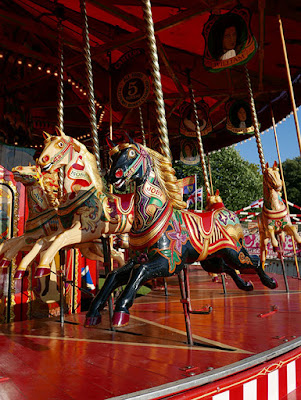 If you fancy popping along, it'll be in Bath till the 20th of August.
Labels: Bath events Victoriana