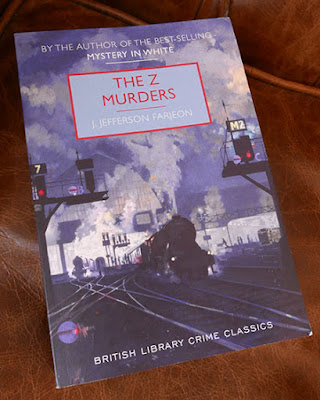 This is one of the books Gisela sent me, and you know what? This one's pretty good. Originally published in 1932, it's got a pace that a lot of novels of the same era lack. All the action takes place within a couple of days, though the hero Richard Temperley still manages to cover a good chunk of England in that time.

The preface likens this to the Paul Temple stories; I feel it could well have its roots in novels like The Thirty-Nine Steps or other adventure tales. Temperley gets drawn into the action after a train journey; he arrives in London on an overnight train disgruntled with a fellow passenger who'd been snoring throughout, but within a very short time of arriving, the other passenger is dead, and the lovely young lady who was the last person seen in the same room as him has fled. Cue Temperley chasing after the lady, trying to avoid the police (who, refreshingly in a novel of this era, are pretty sharp), and endeavouring to work out what the little 'z' symbols left at the scene of this death and the following ones mean.

Like adventure tales, it does get perhaps a bit silly, with a very odd villain and the strangest reason for the murders, but that's okay. The speed will sweep you along, even while you're tutting at the more ridiculous bits.