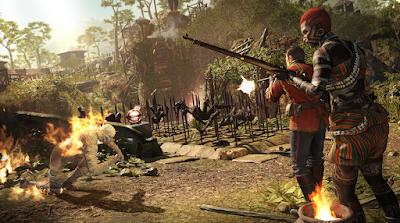 It's not often that my day job overlaps with this blog, but this is one of those rare occasions. Strange Brigade is a game that's been announced for PC, PlayStation 4 and XBox One, release date still to be announced, and it's a 1930s-set adventure game. Remember the short-lived ITV series Jekyll and Hyde? The vibe I'm getting from the game is similar. The four main characters - Frank Fairburne, a British soldier and dead shot with a rifle, northern lass Gracie Braithwaite, shotgun-packing Masai mama Natangu Rushia, and Oxford academic Archimedes de Quincy - are taking on Seteki The Witch Queen, who's unleashing all manner of ancient Egyptian nastiness.

I wouldn't have mentioned it as the game's a shooter, and I'm pretty sure most people who read this blog couldn't give a wet slap for shooting games (I'm not a fan myself), but there is also a series of books coming out based in the gameworld.

Rebellion, the game publisher, also publishes the comic 2000AD, and is a book publisher on top of that. Solaris and Abaddon are two of its imprints, and the latter brought out some very good steampunk adventures, including Jonathan Green's Pax Britannia series. The writers they've got on board for the Strange Brigade books are a mixed bunch – not all male, not all white, but the books I've read by them have been pretty decent. Because of all this, I've got real hopes that what we'll see is something that captures the spirit of the 1930s adventures without the dreaded Attitudes Of Their Times.

I'm very much looking forward to this. As I said, I'm not a fan of shooting games, but the premise is intriguing and I'm definitely keen to read the books. Given Rebellion's multi-media reachings, I'm also hoping that the fun won't stop there: there's potential for other sorts of games, comics, more books and – dare I hope? – even a TV series or film. Agent Carter's not coming back, Jekyll and Hyde got cancelled, and we will say nothing about the last, awful, Indiana Jones film. I need my vintage adventure fix!
Labels: 1930s books derring-do videogames