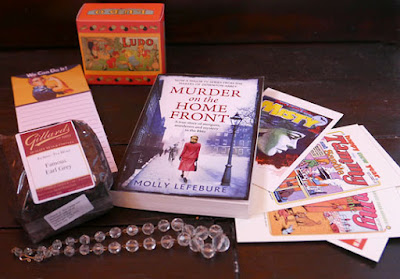 Aha! July was NOT going to get away without a blogoversary giveaway. As always, I've got a pile of stuff that I think is cool to send to one lucky winner, to celebrate the blog making it through another year. I started it back in 2010, and it's kind of odd to think it's lasted six years. It's changed a bit, as indeed have I, but it's also still very much the same: I've tried to keep it non-commercial (if I ever lose my job, I'll probably take ads, but at the moment the Robot is run on a no-ads, no-freebies basis), and while I'll write about a variety of subjects, from SF to travel to food, I try to maintain a vintage angle on everything. And I've met so many brilliant people through blogging, it's been really wonderful. Whenever I think of giving up, I realise how much I'd miss them if they stopped blogging and wonder if they might also miss me, and so I keep on posting. Here's to another six years!

So, enough about the blog and blogging, what's in the box?


Crystal necklace
People seemed to like the crystal necklace I showed off for my contribution to #glamorousjuly's 'sparkle' day, so the winner will get one of their own, to wear themself or pass on to someone else who'll enjoy wearing it.

Earl Grey tea
I know the real Early Grey tea is from Twinings – they invented it – but this is from my local independent tea and coffee merchant. I love indie shops. They give a place a unique feel, and they're more likely to do business with other local businesses and pay proper taxes, so they support both the local community and the country better than many big chains.

If you're going to sit down with a cuppa, you might as well have a good book to read...

Murder on the Home Front
Remember the TV version of Murder on the Home Front? I think back in 2013 when it was screened, there was some speculation about whether it would become a series. Well, it didn't, and to be honest it was all a bit over the top and silly. However, it was based on the memoirs of Molly Lefebure – this book, in fact – so you can read for yourself what it was like for a young woman to end up working in forensics during the Second World War.

Rosie the Riveter magnetic list pad
Rosie is my icon. I have one of these pads on my desk at work. This could well be the most appropriate to-do list pad ever. Can you do it? We Can Do It!

Ludo
As Mr Robot observed, everyone loves Ludo. This little box is small enough to stick in the glovebox of your car for family trips, or to pop in a pocket to take to the pub, or a rucksack for camping or... you get the picture. Neat, petite, family fun, reproduced from a 1920s design.

1970s girls' comics cover postcards
Hehehe. These are cool. I've even included some from the creepy comic Misty, some of whose writers also worked on 2000AD.

That's the core of the box; as ever I'll probably add to it, if only to make sure it all fits in whatever box I post it in. If you fancy winning it, leave ONE comment and I'll draw the winner on the 15th of August by random number generator.
Labels: robot data