Who wants a free 50s fridge?

Sorry about the impromptu break. I didn't seem to have much to write about, and then the country went bonkers and I couldn't think of much to write (frankly, I felt like digging myself a bunker to retreat into until about 2026), hence my general silence. Unfortunately my garden was too overgrown for much excavation, so the bunker plan had to be shelved* and you're stuck with me. But I do have little things to talk about...

First up: anyone want a genuine 1950s Prestcold fridge? Pale yellow outside, turquoise inside. Though the external paint isn't pristine it's still got all its original drawers, and when we last turned it on (back in the 1990s) it still worked, though it was noisy and inefficient. We've been using it to store wine in, as it's lightproof and keeps bottles safe from temperature changes, but it's really taking up too much space for something that no longer works with our dining room design. It's free to a good home, but you'll have to be able to collect it from Trowbridge at a weekend, and you WILL need two people to move it. Contact me if you want it or have any questions at the usual email addy – crinolinerobot AT yahoo DOT com. 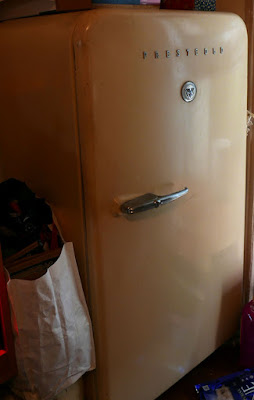 My knitting mojo has returned! I lost it for a long time – I kept knitting because I felt I ought to, rather than because I wanted to – but now it's back. I've been happily beavering away through the front of my jumper and planning what to do next. I'm seriously considering knitting a couple of 1960s tops. Before my holiday I bought a couple of cheap cloth headbands from Claire's Accessories, as I just needed something to hold my hair back. They've been something of a revelation. Matched with simple capris and 1960 tops, they should solve all my summer separates dilemmas, giving me a vintage look that also works with my own minimalist inclinations.

The insurance paid something towards the cost of replacing the camera I lost in Segovia. My new one is a Panasonic Lumix LX100. I felt a bit shallow for asking if I could order the retro brown-and-silver version rather than the all-black one on display in the shop, but it turned out to be £30 cheaper. It's not as nice-looking as my Fuji was, but it takes beautiful photos, and it can connect to my phone via WiFi which will mean I can get proper photos up onto the blog even when I'm travelling. I wasn't too excited about the Lumix at first. I needed a camera, but I felt unable to find the sort of thing I really wanted. However, now I've started to see what it's capable of, I'm keen to take even more pictures with it.

The camera's first testing was when I used it to photograph the urchins' birthday. We made them a little 'cake' of chicken chunks baked in egg, which Pippin ate most of. We also bought them a couple of catnip mice and a catnip teddy bear, which they have mostly ignored, and their friends Merlin and Tiberius sent them a birthday card and some treats, which they can have now they've finished their 'cake'. It's probably a bit sad, throwing a birthday party for two cats, but as our politicians seem determined to send the whole country to hell in a handbasket, some whimsy was welcome. 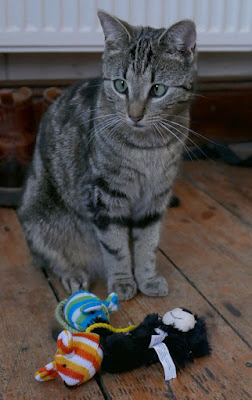 Papa Robot sent me a couple of presents, a toy Carter's Steam Fair lorry (I love Carter's!), and a DVD of Marx Brothers films. Carter's is due back in Bath this summer. I missed the fair last year, so I definitely want to catch it this time round, and have my usual scramble for a decent car in the Rock'n'Roll Dodgems – I like to get a car named after a musician I like.

Anyway, that's what I've been up to. Have you done anything fun?


* An acquaintaince who looked into food sourcing/supply suggested, in all seriousness, that now would be a good time for Brits to start digging vegetable gardens as food prices are likely to rise. I've got other priorities. I'm going to stock up on Spanish wine. Damn those Brexiteers!
Labels: camera cats homewares robot data