Death on the Riviera [books] 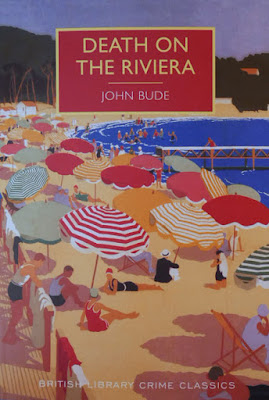 All the other John Bude books I've read to date - all reprinted as part of the British Library Crime Classics series - were written in the 1930s. (If you want to read those reviews, I've read The Cornish Coast Murder and The Lake District Murder, and The Sussex Downs Murder.) This one was originally published in 1952, so is rather later than the others, and shows a definite shift in style. Whereas the 1930s stories were very domestic, all about murders in remote rural locations, this one sees the action transported to the French Riviera, a bit of sunshine during the post-war years when rationing was still in effect. The Riviera is beautifully described; you can almost feel the sunshine seen in films such as To Catch A Thief and it all feels almost impossibly chic.


The cast is a little more glamorous than in the previous novels too. Rather than an orphan living with a miserly uncle, people connected to the hotel and garage trade, or farmers in rural Sussex, this time the action centres on the Riviera villa of a wealthy British woman. Handsome ne'er-do-wells, beautiful girls, stylish cars and boats all feature.

Despite the title, there's only the one death on the Riviera and it occurs fairly late in the novel. Inspector Meredith (investigator in Lake District and Sussex Downs) is on the Riviera helping local police to investigate a counterfeiting ring believed to involve a notorious British forger, assisted by Sergeant Strang. Slowly but surely, all the loose ends tie into one knot. In common with Bude's other novels, this one has a well-thought out and plausible plot, and excellent detail about the investigation.  There's a sense of reality about Bude's novels. While the earlier books mentioned echoes of the First World War, there are traces of the Second in this one; Bude's characters and the events in their lives aren't divorced from history.

I've said before, the Inspector Meredith books would make excellent material for a television series, and this novel does nothing to alter my opinion. Just enough characters, attractive settings, and a plot to keep viewers thinking - here's hoping a production company picks up the rights.
Labels: 1950s books crime